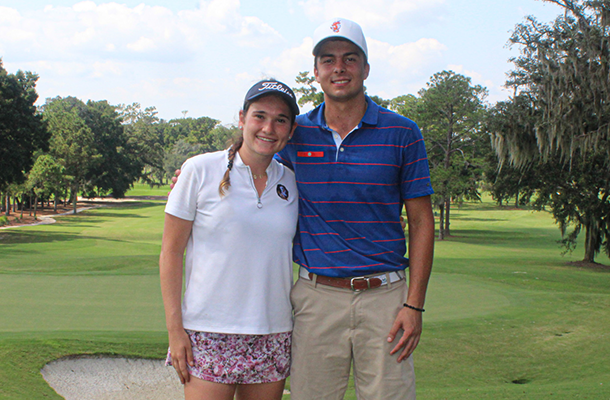 GAINESVILLE, Fla. – Fred Biondi and Taylor Roberts came out on top in the Fall Elite Series event on Tuesday at Mark Bostick Golf Course at the University of Florida. Players battled it out for 36 holes on the first day of the tournament, while finishing the tournament with 18 holes on Tuesday.

Biondi, a University of Florida sophomore, carded a 2-under 208 to win in the Men's Division, while Roberts, a freshman at Florida State University, finished the week at 3-under 207 to capture the victory in the Women's Division.

In the first two rounds, Biondi fired rounds of 69-66 on his home track to take the 36-hole lead at 5-under 135. The 2020 Amateur Public Links champion’s second-round 66 was the low round of the Men’s Division and he was the only player to post two under-par rounds.

Beginning the final round with a three-shot lead, Biondi got off to a quick start with a birdie on the first, finishing his first nine at even par. He ran into some trouble on the back side, bogeying three on the first five holes. He settled down and played the rest of the round at even par. He posted a final-round 73 to earn the two-shot victory and be the only player to finish under par.

Biondi’s teammates, Quentin Debove and Jonah Leach, finished second and third, respectively. Debove posted rounds of 71-67-72 to finish the tournament at even-par 210, while Leach used rounds of 69-73-71 to finish third at 3-over 213.

After a first-round 72 in Monday’s first round, Roberts used four birdies in the second round to card a 2-under 68 and finish the day at even-par 140, four shots back of Sara McKevitt at 4-under 136.

Roberts began the final round with a 2-under front side, birdieing three of her final four holes. She continued her strong play on the back nine. A birdie on the 17th hole secured the one-shot victory for Roberts. The Parkland native finished the tournament with a final-round 67.

McKevitt took home a second-place finish at 2-under 208, carding a 2-over 72 in the final round. Marina Escobar Domingo finished third at even-par 210, with rounds of 69-72-69. Roberts and Domingo were the only two players in the division to post two under-par rounds.

Symone Henriques had the low round of the tournament with a 5-under 65 in the final round to finish sixth at 4-over 214. The Daytona State sophomore aced the second hole in the final round, with a 7-iron from 154 yards.