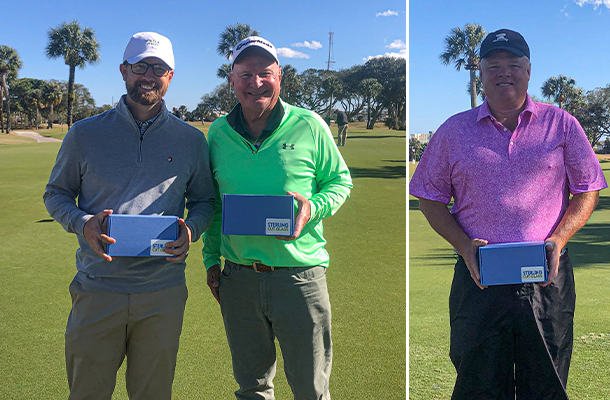 BOYNTON BEACH, Fla. – The 2021 FSGA season kicked off with the Winter Series event at Jacksonville Beach Golf Club. Chester VandenBerg took home the win in the Mid-Amateur Division on Tuesday, while John Lobb was victorious in the Senior Division. Bobby Lundquist captured the victory in the Super-Senior Division.

VandenBerg secured his third victory of the Winter Series season, posting a 4-over 146 to capture the three-shot victory in the Mid-Amateur Division. He opened the tournament with a first-round 73 on Monday to take a share of the first-round lead.

The Ruskin native began the day with a 2-over front side. He two birdies on the back nine to finish the day with another 2-over 73. Mike Smith finished second at 7-over 149, while Neal Pease took third place.

Lobb picked up the win in the Senior Division, surviving a playoff to capture the victory. He carded three birdies in the first round to finish the day with a 2-over 74 and four shots back of the leaders.

The Jacksonville native birdied three-straight holes on Nos. 1-3 and posted a final-round 74 to finish the day in a tie for first with Rob Gai. Lobb came out on top in the playoff to get the win. Gai finished runner-up, while Michael Arasin took home third at 7-over 149.

Lundquist carded an even-par 142 to take home the four-shot victory in the Super-Senior Division. The Sanford native used a first-round 72 to take a one-shot lead over the field.

He continued his strong play on Tuesday, finishing the final round with a 1-under 70. He was the only player to finish at the tournament at even-par or better. Doug LaCrosse secured second place.