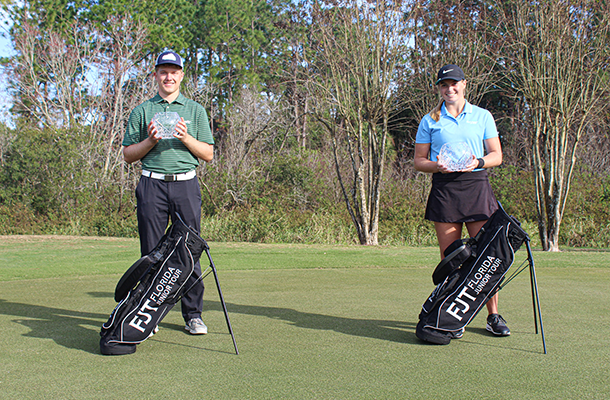 HOWY-IN-THE-HILLS, Fla. – Logan Hunter and Alex Crafton started their years off right with Florida Junior Tour victories at Mission Inn Resort & Club on Sunday. Hunter took home the win in the Boys 16-18 Division and Crafton was victorious in the Girls 16-18 Division.

This is the first FJT win for both Hunter and Crafton.

Hunter used an even-par 144 to earn his first FJT victory. The Tampa native posted a 1-over 73 in Saturday’s first round to sit one shot back of the leaders.

He began the final round with an even-par front side. Hunter birdied two of his three first holes to being the back nine. The 2021 graduate finished the day with a final-round 71 to secure the three-shot victory. Hunter was the lone player in the field to finish the tournament at even-par or better.

James Bradley finished runner-up at 3-ver 147. Bradley and Hunter were the only two players to post under-par rounds on the weekend, both carding a 1-under 71 on Sunday. Three players finished the weekend in a tie for third at 4-over 148: Joshua Stewart, Jon Wang and Wyatt Pattner.

Crafton used a 12-over 156 to secure the one-shot victory and her first FJT at Mission Inn. She began the weekend with a 4-over 78 to sit one shot back the leader heading into Sunday’s final round.

The Lake Mary native posted a 1-over front nine to start off the final round. Crafton finished the day with a 5-over back nine to finish the day at 6-over 78 and take home the win. Olivia Lu took home a runner-up finish 13-over 157, while XiMiao Zhai finished third at 14-over 158.