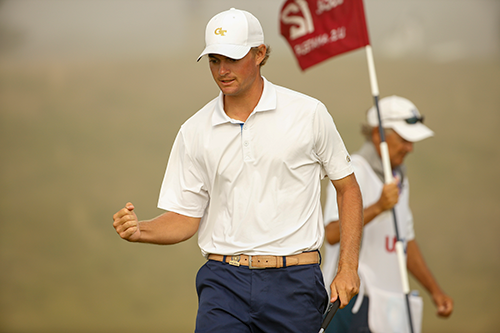 LIBERTY CORNER, N.J. – Tyler Strafaci has been selected as a member of the 10-man roster for the 2021 United States Walker Cup Team, the United States Golf Association announced Monday.

The Walker Cup will be held Saturday, May 8 to Sunday, May 9 at the Seminole Golf Club in Juno Beach.

Strafaci raised the trophy at the 120th U.S. Amateur Championship in August, rallying from an early 5-down deficit to defeat Ollie Osborne, 1 up, in the 36-hole championship match. The Davie native captured amateur golf’s most important victory on the heels of winning at the North & South Amateur and the Palmetto Amateur in July.

“That’s why I always wanted to be the first Strafaci to make a Walker Cup,” Stracfi said, after his U.S. Amateur win. “It’s been a rough couple of years because I’ve been pretty close to it, and now that I’m on that team, I feel like I’ve made [my grandfather] proud, and I feel like it’s just unbelievable. I mean, it’s something I’ve dreamt about and something that my father has told me about, stories about my grandfather.”

The Walker Cup Match is a biennial amateur team competition between the USA and a team composed of players from Great Britain and Ireland, selected by The R&A. The Match is played over two days with 18 singles matches and eight foursomes (alternate shot) matches.

One point is awarded for each victory and a half-point is assessed for matches that are square at the conclusion of 18 holes. The United States holds a 37-9-1 lead over Great Britain and Ireland after rallying back in last year's contest to claim its first victory on foreign soil since the 2007 Match at Royal County Down.

Strafaci will be the first FJT alumni to compete in the Walker Cup since Blayne Barber in 2011. Barber was a member of the 2011 United States team that featured Jordan Spieth and Patrick Cantlay, among others.