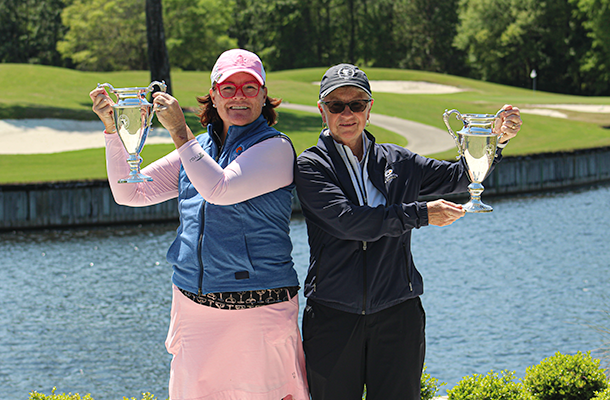 Keyer-Scott began the championship with an even-par 72 in Tuesday’s first round to sit in a tie for second with Lin Culver, one shot back of the first-round leader, Susan Cohn.

The 2020 FSGA Women’s Senior Player of the Year, Keyer-Scott posted a 1-over 73 in the second round, closing out her front nine with three-straight birdies on No. 15-17. She finished the day in solo second place at 1-over 145, one shot back of Cohn.

Battling wind and light rain in the final round, Keyer-Scott started the day with a 1-over front side, with a birdie on the sixth. Making the turn, Keyer-Scott and Culver sat in a tie at the top of the leaderboard at 3-over.

Keyer-Scott ran into some trouble on the back side, playing No. 13-15 at 4 over, with Culver taking the lead on the outright lead on the 13th hole. Heading to final hole, Culver held a two-shot lead over Keyer-Scott. Culver finished the hole with a double bogey, while Keyer-Scott secured the one-shot victory with a par, carding a final-round 77.

The Bonita Springs picked up the Senior Amateur win, after finishing runner-up at last year’s championship. This is the second FSGA title for Keyer-Scott, who won the 2018 Women’s Mid-Amateur Championship.

Culver finished the week in a tie for second with Cohn at 7-over 223. Culver posted rounds of 72-74-77 for the three-day championship. Cohn, who was the 2019 champion, used rounds of 71-73-79 to take a share of the runner-up finish. Her first-round 71 was the low round of the championship.

Sherry Herman finished fourth at 13-over 229, while Therese Quinn and Mary Jane Hiestand tied for fifth at 14-over 230.

Hunt started the championship with a 9-over 81 in Wednesday’s first round. The Ponte Vedra Beach native finished the day one shot back of the first-round leader, Sandie St. Ogne.

Hunt got the final round started with a 3-over front side. She finished the day with a 4 over on the back side to card a final-round 79 and earn the three-shot victory.

She is the first player to win back-to-back Women’s Super-Senior titles in FSGA history, earning her third Super-Senior victory in four years.

St.Onge finished three shots back of Hunt in second place at 19-over 163, while Kibbe Reilly and Janet Van Slyke tied for third at 21-over 164.