FSGA volunteer, Kevin Johnson was a member of the United States Team in the 1989 Walker Cup 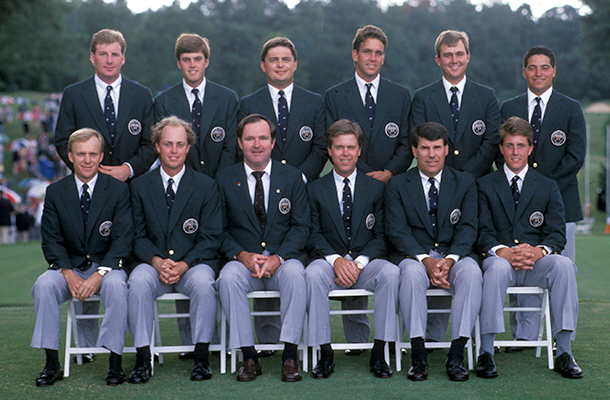 TAMPA, Fla. – Kevin Johnson has played golf for the majority of his adult life. In that time, he won a USGA Championship, captured six victories on the Korn Ferry Tour and competed for three years on the PGA Tour. But after all those years, one memory stands out among the rest.

“The Walker Cup is the greatest memory I have of golf to this day,” Johnson said.

Born in Plymouth, Massachusetts, Johnson began playing golf at a young age and went on to play collegiately at Clemson University. He was an All-American for the Tigers and won the 1987 U.S. Amateur Public Links Championship. After 30 years in professional golf, Johnson has made the voyage into officiating, beginning to volunteer with the FSGA in 2017, before going on to work for the PGA Tour Champions.

Most importantly though, Johnson was a member of the Walker Cup team that took on Great Britain and Ireland at the Peachtree Golf Club in Atlanta, Georgia in 1989.

Johnson had a good indication that he would be on the team after his win at the U.S. Amateur Public Links landed him on the 1988 World Amateur Team for the United States.

“It’s a pretty good indication of where you are in the eyes of the USGA,” Johnson said. “There’s only four American players that make that each year. That’s kind of the stepping stone.”

“Until you see that invite though you’re not entirely sure you’re going to make,” Johnson said.

That indication proved to be true, as Johnson was invited to join his three teammates from the World Amateur, along with decorated amateurs, Phil Mickelson and Robert Gamez, to represent the United States in the 1989 Walker Cup.

The first three sessions of the Walker Cup were a whirlwind for Johnson. He had played the practice rounds with Jay Sigel. But when another player was injured, Jay, the veteran player on the US side, took on the alternate, Greg Lesher, as his partner.

Kevin was instead paired with David Eger for the foursomes matches. The two lost two hard-fought matches and this would become a theme for the U.S. team that week.

“The memory I have is we were getting smoked after the first two days and then we had a big team meeting before the singles matches,” Johnson said.

A team meeting that proved to be pivotal for the US side.

Down 6.5 points with only eight singles matches remaining, the United States began to mount an unbelievable comeback, winning three of the first four matches. 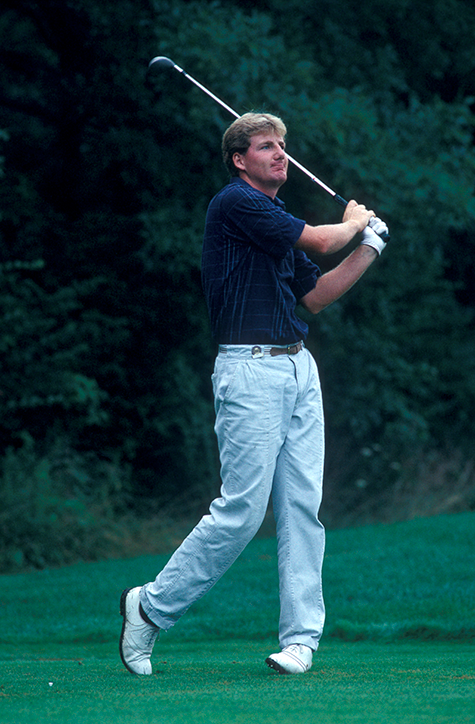 “We could tell all the momentum was going our way,” Johnson said.

Johnson, who was playing in the second to last match, maintained a steady lead over Craig Cassells. A lead that he would not relinquish. He closed out Cassells 4 and 2, leaving the final match between Sigel and Jim Milligan to determine the cup.

When his match concluded, Johnson shook hands with his competitor and headed straight back out to the course. When he made it over to Siegel’s match, he was 2 up with three holes to play.

With just the one match on the course, Johnson recalls the scene on that final day at Peachtree being something he had never seen before.

“It’s not like Augusta where 50,000 fans are spread around. All the fans are right there,” Johnson said. “It was a mob scene.”

After dropping the 16th hole, Siegel was looking to halve the 17th, as Cassells was also in trouble after a chip that failed to find the putting surface.

However, in what was no doubt the shot of the event, Cassells would find a way to roll in his fourth shot from off the green to steal the 17th hole away from the United States. Heading to the 18th tee tied, both players would go on to make 5 and halve the hole and thus the match.

Sigel, a staple of USGA teams at this point in 1989, was no doubt disappointed by the result.

“It’s probably one of the few times he didn’t pull it out,” Johnson said. “But I would take that bet the next time. It just didn’t work out in our favor.”

Despite falling short, Johnson remembers that week with fond memories and acknowledges the history he is a part of as a Walker Cup participant.

“Anywhere I go these great golf courses find out you were on a Walker Cup team they treat you so well. It’s like the cool kids’ club.”

Tyler Strafaci, the 2014 Boys’ Junior champion and Florida Junior Tour alumni, will join that club when he tees it up this month at Seminole Golf Club. When asked about what advice Johnson would give to Strafaci, he said simply, “Just enjoy the hell out of it.”

Strafaci is no stranger to competing on the biggest stages, having won the U.S. Amateur Championship in August, along with competing at the U.S. Open and Masters. These experiences will all be helpful in handing the moment, Johnson said.

“It’s a different pressure. It’s different when you got 10 guys on your team that are depending on you.”

Faxon wasn’t supposed to hit the tee shot on the first hole of the morning’s alternate shot match. His partner, Willie Wood, was penciled in to tee off on the odd holes for the pairing. However, when Wood got to the tee that morning he looked at Faxon and told him, “I can’t hit the first tee shot. I’m too nervous.”

So Faxon stepped up to the tee.

“That is still the most nervous I’ve been on a tee shot,” Faxon said.

Like all the other Walker Cup participants, Johnson and Faxon stood on the first tee listening to the bagpipes playing, hearing the national anthem and feeling emotional.

“You tee it up in the Walker Cup, you hear the national anthem and you know you’re playing for your country,” Johnson said.

Competitors in the 48th Walker Cup will also get this moment on their home turf in May at Seminole Golf Club. The Donald Ross course was designed in 1930 and has been one of golf’s most exclusive clubs. 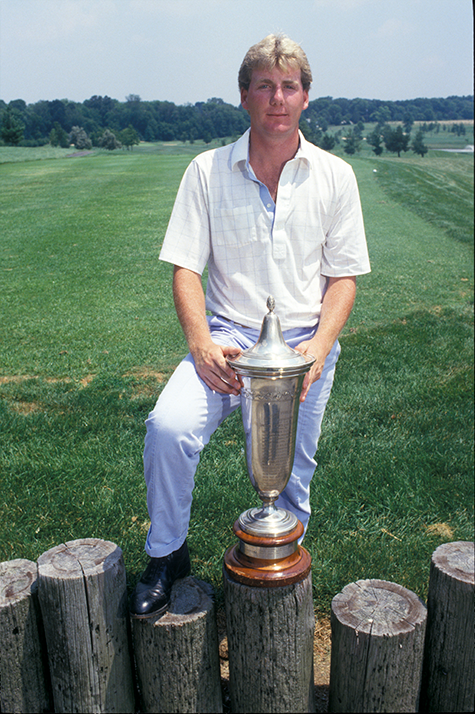 Living in the Palm Beach area, Johnson has been able to get out to the club a handful of times.

“It’s like getting on Augusta National. You got to get the invite,” Johnson said.

“It’s going to be a great match play golf course. There’s a couple short holes you can go after. But also you can be right up next to the green and not a chance at getting one up and down.”

The public got a glimpse into the club when it hosted the Taylormade Driving Relief Skins Game in 2020. The property sits along the Atlantic in Juno Beach and on days when the wind picks up, it’s a nasty tough golf course, Johnson said.

Strafaci and the Unites States team will look to defend the title on home soil this month, and Johnson believes this home course advantage will be significant in this year’s Walker Cup.

“We have all that local knowledge with all the USGA and Walker Cup presidents that are there and former Walker Cup players. They will tell the guys where to hit and where not hit it,” Johnson said.

Johnson would’ve loved to be there next month to offer any assistance he could give. However as his playing career has winded down, Johnson has started a new job as a Rules Official for the Champions Tour.

“It’s my second week of work, so it was tough to ask for a vacation,” Johnson joked.

After a brief stint as a guest Rules Official on the Korn Ferry Tour, Johnson hoped to get a full-time position with the PGA Tour. Unfortunately, COVID forced a change in plans.

During the PGA Tour’s hiatus from playing events, he was told that the Tour would not be doing any hiring. This forced Johnson to look for work elsewhere, eventually turning to a job in insurance.

But when the PGA Tour Champions called in March, he knew it was too good of an opportunity to pass up.

Being the first hired Rules Official to come from a professional career in quite some time, Johnson believes that his playing experience will be an asset to the Tour as he begins his new career as a Rules Official.

“As a former player I’m able to go into a situation and know what their expectation is,” Johnson said. “I want to help them get out of the situation they are in. I’m not there to catch them on anything.”

Having spent so many years playing alongside many of the current Champions Tour competitors, it is an interesting dynamic when he is called in to give a ruling. He was giving a ruling to a player, who he used to play practice rounds with, and as he denied him relief he said “trust me you know I’m pulling for you here but you’re just not going to get relief here.”

“They know I’ve been through the battle with them all. At least they know that I know where they are coming from.”

As Johnson turns the page in his golf career, the 2021 Walker Cup will no doubt provide a new chapter for Strafaci and the rest of the competitors at Seminole next month.

“The rest of your life you're known as a Walker Cupper,” Johnson said. “It’s a pretty cool title.”