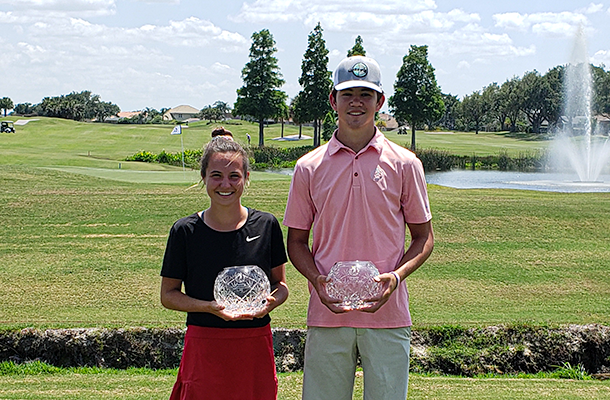 Tucker birdied the final hole of the tournament to secure his second FJT with a 9-under 135 for the tournament. Saturday’s first round saw a lot of red numbers in Boys’ Division, with 14 players finishing the first round under par.

Michael Weber took the first-round lead with a 7-under 65, the low round of the weekend. Tucker sat two shots back of Zhu after a first-round 69.

Beginning the final-round in a tie for seventh, Tucker got off to a hot start in the final round with three birdies on his first six holes, adding another on the ninth. He continued his strong play on the back side with back-to-back birdies on the 11th and 12th. Tucker birdied the final hole of the day to post a final-round 66 and secured the one-shot victory.

Two players finished the weekend in a tie-for-second place at 8-under 136: Danny Erickson and Reggie Zhu. Erickson put together rounds of 68-68, while Zhu used rounds of 67-69 to take a share of second.

Hofmeister fired the low round of the weekend, in the Girls’ Division, to earn her first FJT win at even-par 144. The Tampa native began the weekend with a 1-over 73 on Saturday to sit one shot back of the leader.

Hofmeister birdied three of her first six holes of the day to start the final round. She made the turn at 2 under for the round, before adding a 1-over back side. Hofmeister secured the two-shot victory with a final-round 71.