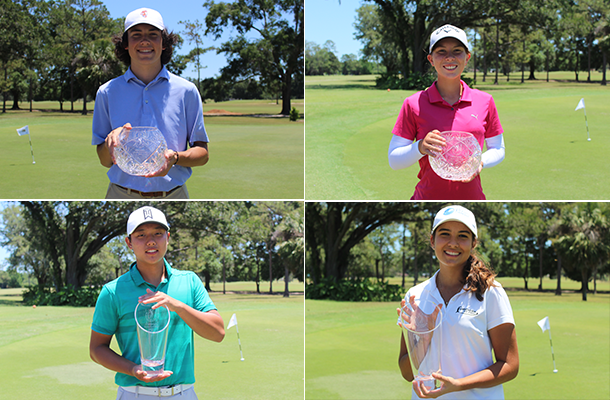 OCALA, Fla. – Four players picked up Florida Junior Tour victories on Sunday at Ocala Golf Club. JP English and Jordan Knox were victorious in the 16-18 Division, while Jizhou Tian and Morgan Pichler picked up wins in the 13-15 Division.

This is the first FJT win for English, Knox and Tian, while Pichler took home her second.

English went wire-to-wire to secure his first FJT victory at 6-under 138. The Ponte Vedra native began the tournament with a bogey-free round, carding four birdies, to take a one-shot lead over the field.

He ran into some early trouble to begin the final round with a double bogey on the first. English quickly turned it around with a birdie on the fourth. He posted a 3-under back side, birdieing two of his final four holes to finish with a final-round 70 and take the two-shot win.

Gustavo Rangel finished runner-up at 4-under 140, with rounds of 71-69. English and Rangel were the lone two players in the division to post two red numbers. Three players finished the weekend in a tie for third: Chris Terzian, Jake Navaretta and Zheng Yi (Louie) Liu.

Knox took home her first FJT win with a 2-over 146 to secure the one-shot victory. She got the weekend start with an even-par 72, starting the round with back-to-back birdies, to sit one shot back of the leader.

The Fort Myers native began the final round with a 2-over front side, carding a birdie. She finished the day with an even-par back side to post a final-round 74 and take home the one-shot win.

Brianna Castaldo finished second at 3-over 146 after rounds of 72-74, while Elle Folland and Tabitha Hanely finished third at 7-over 151.

Tian used rounds of 73-71 to take home the FJT win, finishing the weekend at even-par 144. The Lake Mary native began the weekend with an even-par 72, carding three birdies on the day to sit three shots back of the leader.

She got the final round started with an even-par front side. Tian birdied two of four holes on No. 4-7 and finished the day with a final-round 71 to secure the one-shot victory.

Asher Joseph used rounds of 74-71 to earn a second-place finish at 1-over 145. Three players finished the tournament in a tie for third place at 4-over 148: Ethan Keys, Clipper Salmon and Tyler Foegen.

Pichler overcame a six-shot deficit to earn the win in the Girls 13-15 Division at 4-over 148. She posted a 6-over 78 to start the tournament on Saturday, finishing the day six shots back of the leader.

The Hobe Sound native got off to a hot start in the final round with a bogey-free front side with three birdies. Pichler ran in some trouble on the back side, playing the first four holes at 3 over. She turned it around with back-to-back birdies on the sixth and seventh.

Pichler carded a final-round 70 to secure the two-shot victory at 4-over 148.

Braydn Smith and Hannah Hall finished in a tie for second at 6-over 150, while Vilda Westh Blanc took fourth at 8-over 152.