Written by: Darin Green, Senior Director of Rules of Competitions

The Walker Cup was played last weekend at Seminole Golf Club in Juno Beach, with the United States of America edging out Great Britain & Ireland 14-12. I hope that you were able to watch some of the matches on the Golf Channel; it was very entertaining.

If you are unfamiliar with the Walker Cup, please let me fill you in. This was the 48th playing of the Walker Cup which is a match played every two years between the 10 best amateurs from the USA against the 10 best amateurs from GB&I. They play foursomes (alternate shot) and singles matches. Nearly all of golf’s greatest players from the USA and GB&I have had the honor of representing their country in these matches since 1922. 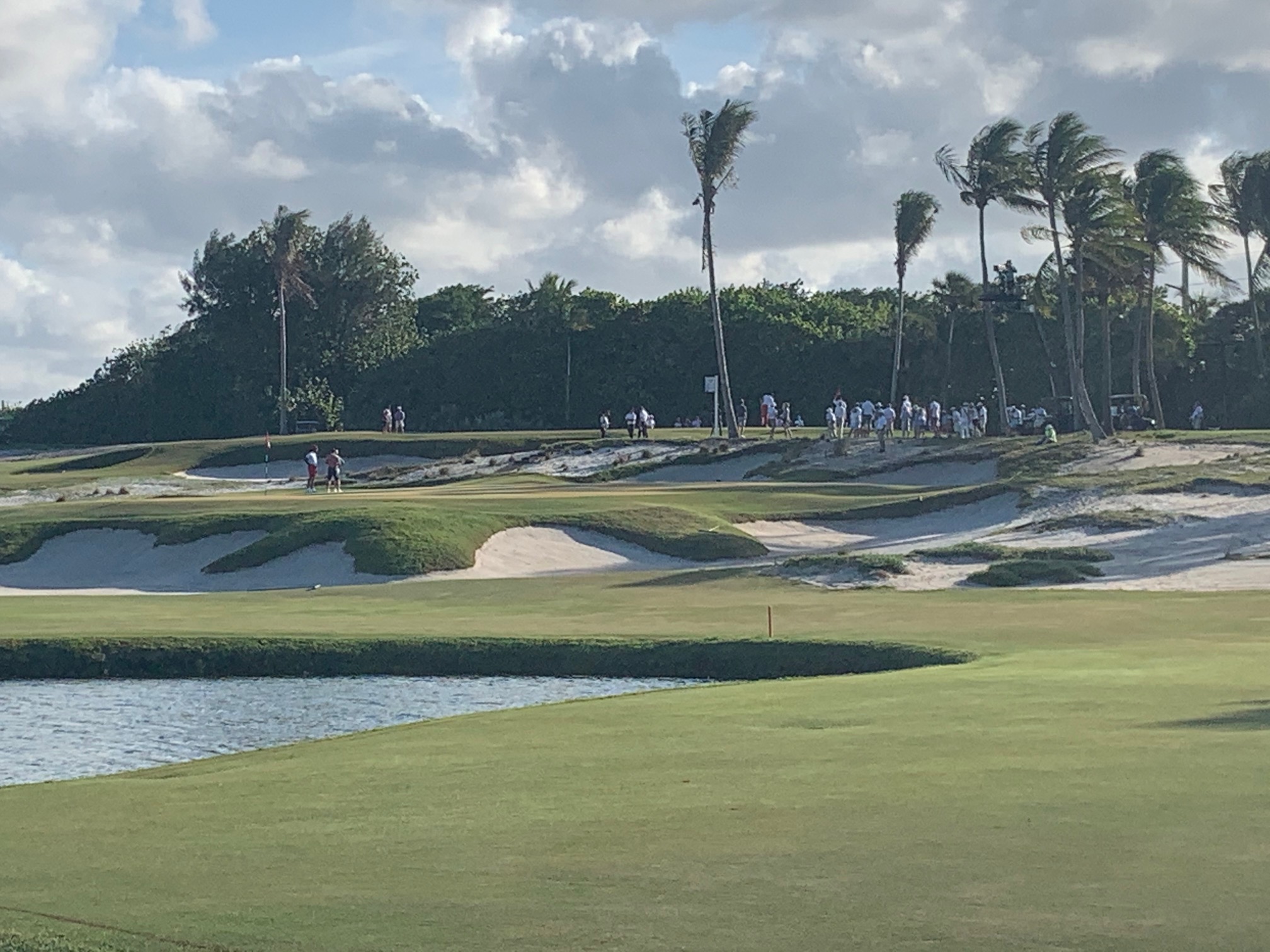 The reason I am writing about the Walker Cup is that myself and a few other rules officials from Florida were very fortunate to be invited to serve on the Rules Committee this year. The invitation came as surprise because I knew the USGA was reducing the amount of people involved due to Covid. I was honored and excited to officiate the Walker Cup. I hope that the following paragraphs and pictures give you a little insight to our experiences.

After accepting the invitation and going through various Covid protocols, it was time to depart Tampa and head to Juno Beach. FSGA staff members that were also fortunate to receive an invitation were Jeff Magaditsch, Jim Demick, and Jack Pultorak.

We left Tampa Thursday morning and arrived at Seminole Golf Club shortly after lunch to receive our credentials. There was a storm in the area, so we quickly departed the club and checked into the hotel. The Rules Meeting began at 5:00 PM where all of the officials introduced themselves. Then, the USGA staff went through the Local Rules sheet, discussed some unique things regarding the course, and provided us with some guidelines.

On Friday, we arrived to the course for an early lunch and then walked the course to familiarize ourselves with items on the Local Rules sheet and prepare on how to best position ourselves during the matches. After our walk of the course, we were lucky enough to cross paths with Bob Ford, Director of Golf at Seminole Golf Club, who is retiring soon. We chatted with Mr. Ford and reconnected with Matthew Cahill, who will be promoted to Director of Golf once Mr. Ford retires. Fun Fact – Mr. Cahill played the Florida Junior Tour years ago and will be competing in the 2021 Florida Open in July. Near the end of the day, we joined the Flag Raising Ceremony where the players were introduced, several people spoke including President Bush, and the flags of each country were raised while each national anthem were played.

There were two assignments for rules officials, referee or forward observer. The role of the referee was to walk with the players, apply the Rules, monitor pace of play, and announce the result of each hole. The role of a forward observer is to stay one-shot ahead of the match and search for balls, determine who is farthest away from the hole, and identify potential rules issues for the referee (and chat with spectators).
On Saturday, Jack Pultorak and I were assigned as forward observes for the third match of Foursomes. Jack took the left side of each hole and took the right side. It was a perfect “walk” for an observer; we did not have any questionable issues and the weather was great. The only challenge came when our match caught the match ahead and the spectators following Match 2 lagged behind. Jack and I quickly became marshals and for several holes had to clear the spectators out of the way for our players.

I did not have any assignments in the afternoon so I walked around the course and became a spectator. It was a great day!

Jim Demick, recently retired Executive Director of the FSGA, had the very special honor of serving as the starter for all matches during the Walker Cup. Jim perfectly balanced a professional and relaxed atmosphere on the 1st tee. Saturday morning must have been a little nerve racking for him because President Bush and Governor DeSantis joined the players on the starting tee with a TV camera focused on all of them. While waiting for the first starting time, Jim was able to get the former President to laugh with a little joke before professionally, and perfectly, announcing the first match of the 48th Walker Cup Matches.
On Sunday, Jeff Magaditsch and I were assigned to the final match of the Walker Cup. Honestly, we were a little nervous; if the result of the Walker Cup came down to our match there would be masses of people and pressure! A friend texted me the night prior and said “make sure the world doesn’t know you name Monday morning” – which did not help with the nerves. Come go-time, Jeff and I were relaxed and focused. Jeff served as the referee and I was the forward observer. There was a bit more work during this match because the two players hit many approach shots seemingly the exact distance from the hole, so I had to determine who was farther away from the hole. A few times, I could not determine it and Jeff actually paced off their yardages.

Our match concluded on the 16th hole and I heard it was the point that secured the win for the Americans. It was calm around the 16th green because most of the spectators went over to the 18th green to watch Floridian Tyler Strafaci finish his match. Jeff and I shook hands, and then enjoyed our walk back to the clubhouse as the sun was setting. We returned our radios, said our thank you’s and goodbyes, hopped in the shuttled bus, found our cars and returned home.

It was an amazing and memorable experience!

Enjoy the photos below. Missy Crisp and Kendra Graham also reside in Florida and officiated, but regrettably I did not get them in any pictures.