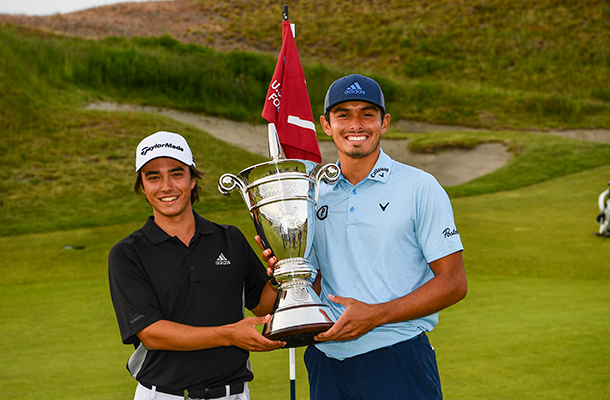 UNIVERSITY PLACE, Wash. – When Kiko Francisco Coelho and Leo Herrera were paired together in the final round of the 2020 Florida Boys’ Junior, they were probably not thinking that almost a year later they would be raising the U.S. Four-Ball trophy.

But that is just what happened on Wednesday at Chambers Bay. Coelho and Herrera captured a dramatic 19-hole victory in Wednesday’s championship match of the 6th U.S. Amateur Four-Ball Championship, defeating Brendan MacDougall and Sam Meek.

“No words can describe how I feel,” Coelho said. “We came here, we knew we could win. We had a really good team. We just played solid all week.”

“I knew we could do it,” Herrera said. “I kept telling Kiko, I know we can do it; we're going to be hard to beat. We were tough as nails out there.”

It took an extra hole, but it was Herrera and Coelho who came out on top in Wednesday’s championship match. Tied on the 605-yard 18th hole, MacDougall nearly holes a 40-yard pitch shot and his tap-in birdie was conceded.

This left either Coelho and Herrera with a must-make putt. Coelho missed his 20-foot birdie putt, but Herrera stepped up after him and rolled in his 14-footer to send the match to extra holes.

On the 19th hole, Coelho reached the green in two and lagged to 2 feet and holed his short birdie putt. Meek had 4 feet for birdie to continue the match, but the putt rolled just to the left to give Herrera and Coelho the win.

The Florida duo began the week by earning the No. 8 seed with an 11-under 132 in the stroke-play seeding. The captured a win in the Round of 32 in 21 holes, fighting back from being 2-down early in the match. They took down the No. 1 seed in the Quarterfinals, defeating Kelly Chin and David Ford, 3 and 1.

A Florida Junior Tour alum, Herrera began playing in FJT events in 2015, finishing his junior career with two FJT victories and 15 top-10 finishes, along with a runner-up finish at the Boys’ Junior.

Coelho, who moved to the U.S. two years ago and is an incoming freshman at Arizona State University, was honored with the Boys’ Junior Player of the Year award following that saw him win the Boys’ Junior and add his second FJT win. He added five other top-10 FJT finishes this season on his way to being named the FJT Points Champion for the Boys 16-18 Division.

With this victory, the two FSGA standouts earned their way into the 121st U.S. Amateur Championship at Oakmont (Pa.) Country Club in August. Coelho will also now be in the field for the U.S. Junior Amateur in July at The Country Club of North Carolina.