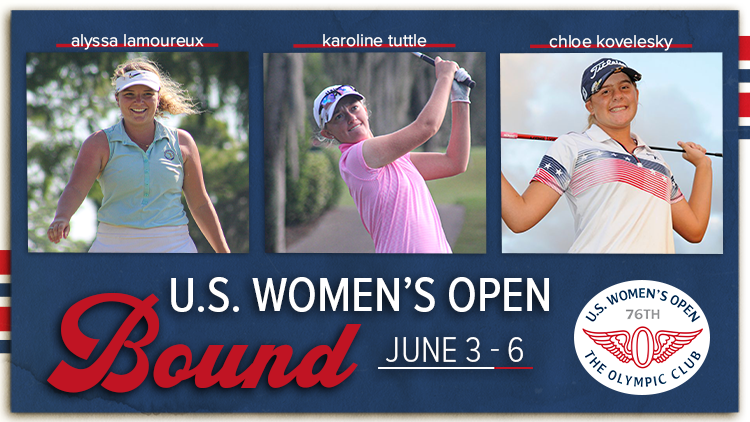 TAMPA, Fla. – When the best players in the world tee it up at the 76th U.S. Women’s Open Championship at The Olympic Club, three Florida State Golf Association standouts will be among them. Alyssa Lamoureux, Chloe Kovelesky and Karoline Tuttle will all make the trip to San Francisco for the second women’s major of the season on June 3-6.

Lamoureux and Tuttle secured their spot in the championship at the 36-hole qualifier at Bradenton Country Club. Tuttle posted rounds of 71-72 to take the second qualifying spot at 1-over 143. Lamoureux was left waiting until the final group came in, earning the last qualifying spot with a 2-under 70 in the final round. Kovelesky punched her ticket at the Banyan Cay Resort & Golf qualifier, carding rounsd of 70-70–140.

A past Girls’ Junior Player of Year, Lamoureux has been competing on the Florida Junior Tour and in FSGA competitions since the age of 12. Along with being a past Player of the Year, Lamoureux is a two-time FSGA champion and a five-time FJT winner.

“It’s absolutely a dream come true for me,” Lamoureux said. “This has been a dream since I was a little girl, to go to the U.S. Women’s Open at some point in my life. It honestly feels amazing to have this opportunity.”

Lamoureux, who just finished up her junior season at the University of Central Florida, will be competing in her first U.S. Women’s Open Championship and her fourth USGA championship.

Tuttle is the reigning Girls’ Junior Player of the Year and has been a top contender in FJT and FSGA events for the last five years. Over her junior career, the Lake Mary native has earned six FJT wins, including two last season.

“It means so much to me to be able to compete at the U.S. Women’s Open,” Tuttle said. “This is a dream come true to play against the best in the world. It’s going to be amazing.”

The 17-year-old has had great showings at the Florida Women’s Amateur, securing a third-place finish at the last year’s event and a runner-up finish in 2017. Tuttle competed against a field of professional and collegiate players at the 2020 Florida Women’s Open and finished the week with a tied-for-eighth finish.

When Kovelesky arrives onsite at The Olympic Club, she will be the youngest player in the field at just 14 years old.

"I’ve always wanted to qualify for the U.S. Women’s Open, it’s a big accomplishment," Kovelesky said. “I’m looking forward to meeting everyone. I love being able to be there and kind of see what my future looks like.”

The Boca Raton native will be competing in her third USGA championship, having advanced to the Round of 32 with Jordan Fischer earlier this year at the U.S. Women’s Amateur Four-Ball Championship.