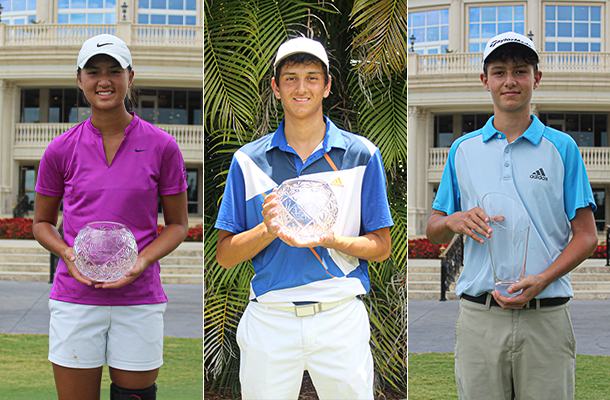 MIAMI, Fla. – It was an FJT Major weekend at Trump National Doral in Miami, and three players went home victorious. Gustavo Rangel had the 54-hole low in the Boys (16-18) division, Matvey Golovanov won in the Boys (13-15) division, and Victoria Tan was the winner of the Girls (13-18) division.

Rangel and Tan both went home with their first-ever FJT champions' bags. Golovanov won for the third time this season, continuing some really phenomenal play.

To begin the weekend, Rangel posted a tournament-low 1-under 70 on Saturday and followed that with a second-round 73. Starting the final day two shots back, the Puerto Rican product posted a 1-over 72 on Monday en route to victory. With a one-shot lead on his 54th hole, Rangel stuck an approach shot that led to a simple two-putt par for his victory. He finished atop the leaderboard at 1 over for the tournament.

Other notable performances were made by Moses Compaan and Campbell Kennedy. Compaan has been on a strong run lately, shooting 71-70-75 to capture a second-place finish – his fifth top-5 finish of the year. Kennedy's 5-under 67 on Saturday was the low round of the tournament, finishing in seventh place overall.

Golovanov posted some low numbers on Sunday and Monday, following his first-round 74 with a 68 and 69, finishing the tournament at 5 under. The Boca Raton resident won the 54-hole tournament by six strokes, and he was the only player to finish under par at Trump National Doral.

Reggie Zhu and Kelvin Hernandez finished tied for second place at 1 over, with the former shooting 71-72-74, and the latter shooting 74-69-74.

Victoria Tan played in her first ever FJT event this weekend. She happened to finish in first place along the way. Tan posted a tournament-low 68 (-4) on Sunday and sandwiched that score with two 78's on Saturday and Monday, finishing 8 over in first place.

Mayumi Umezu and Anika Richards finished second and third, respectively, carding tournaments of 11 over and 13 over. One round of note was had by Rachel Gomez, who shot a 3-under 69 on Sunday.