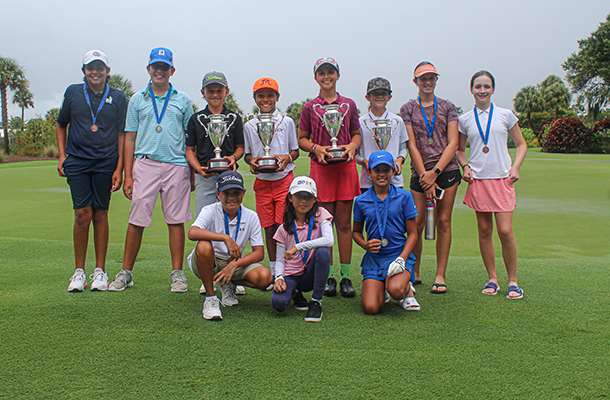 Russell fired an impressive final-round 66 to take home the victory in the Boys (11-12) division at 6-under 137. He began the championship with a 1-under 71 in the first round to sit two shots back of the leader heading into the final round.

The Jacksonville Beach native got off to a quick start on Sunday with back-to-back birdies to begin the day. He added a birdie on the sixth and finished the front side at 3 under for the day.

Russell kept it rolling on the back with a birdie on the 10th to move to 5 under for the day. He birdied two of his three holes on Nos. 15-17, securing the four-shot victory with a par on the final hole. His bogey free final-round 66 was the low round of the championship.

Essakali captured a commanding win in the Girls (11-12) division, securing the 10-shot victory with a 1-under 142. The Naples native fired a 5-under 67 in Saturday’s first round to take a nine-shot lead over the field.

She got off to a slow start, playing the first four holes at 2 over. Essakali quickly turned it around, playing the remainder of her first nine. She finished the day with a 1-over second nine to post a final-round 75 and secure the win.

Monssoh picked up the victory in the Boys (9-10) division, finishing the championship at 2-over 146. The Miami resident began the weekend with a 1-over 73 to take a two-shot lead over the field.

He carded a 1-over first nine to begin the final round. Monssoh quickly birdied the first hole after the turn, adding two more on the day to finish with a 1-over 73 and capture the five-shot win.

Gordon Nip finished second at 7-over 151, with rounds of 75-76. Two players finished in a tie for third at 8-over 152: Niko Gordic-Ronderos and David Cochran.

Getting off to a hot start in the final round, Pedrique birdied the first hole and added another on the 17th. The Palm Beach Gardens native made the turn bogey free with two birdies. She continued her strong play on the second nine, adding three birdies to finish with a final-round 69.