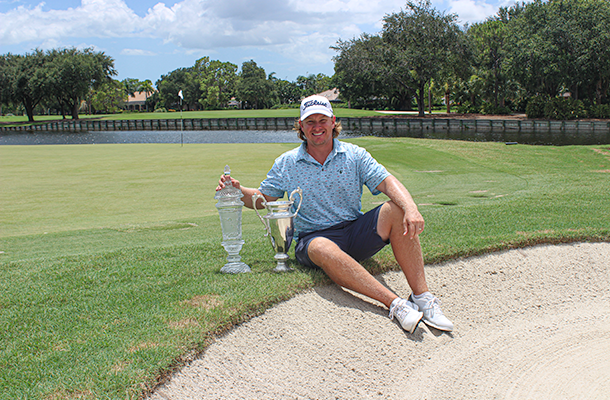 FORT MYERS, Fla. – Connor Arendell began the day in a tie for tenth and four shots back of the leader. He ended the day by raising the Florida Open trophy and taking home the $15,000 first-place check.

The Fort Myers native fired bogey-free, 9-under 63 on Sunday to capture the 75th Florida Open title. He secured the one-shot victory with a 15-under 200 for the championship.

"It feel great," Arendell said. "I had a great final round today. Everything was on. It was the lowest I could go today, I made just about everything. It just felt good to come from behind like that and win."

After rounds of 67-70 to begin the championship, Arendell didn’t waste any time in the final round. He began the final day with birdies on three of his first four holes to move into a tie for second place. Arendell added two more birdies on the front side to move one shot back of the leader, Jeremy Wells at the time.

Wells also had a hot start to the day and finished the front nine with four birdies. He took the outright lead with a birdie on the par-4 eighth hole and added another on the par-5 10th.

Arendell kept it rolling on the back with two birdies on the 10th and 11th. Arendell’s birdie on the 11th gave him a share of the lead with Wells. He played the next five holes at even par, before adding a key birdie on the 16th. This gave him the solo lead at 14 under, as Wells’ tee shot found water on the 15th.

"I had no clue where I stood," Arendell said. "I just tried to make as many as I could. I had no pressure, I just played the best I could and it all worked out."

After making it on the green in two, Arendell’s eagle putt just slide by on the 18th and he tapped in for birdie to post a bogey-free 63 in the final round. His 9-under 63 tied the competitive course record on the Long Mean course at Fiddlesticks with Stone Cowie, who posted a second-round 63, and Fielding Brewbaker who also posted a 63 in the final round.

Arendell headed to the clubhouse with a three-shot lead over the field.

Tyler Strafaci, who began the final round with a one-shot lead, gave it a run the back nine. He birdied the 15th to cut Arendell’s lead to two shots. The 2020 FSGA Player of the Year had a great up-and-down on the 17th to save par. He headed to the final hole needing an eagle to tie it.

After hitting his second shot on the green, Strafaci was left with a 50-foot putt for eagle. The Florida native missed his eagle putt and finished with a birdie. This locked up the championship and the $15,000 first-place check for Arendell.

This is the first FSGA championship win for Arendell, who is a Florida Junior Tour alum and winner. His 15-under 200 for the championship is the second lowest total score in Florida Open history.

Strafaci took home a second-place finish, posting a 14-under 201 and taking home $8,750. Four players finished the championship in a tie for third at 11-under 204: John DuBois (a), David Branshaw, Wells and Jacob Arnett, with the three professional each collecting $4,583.

Dubois fired a final-round 65 to earn a top-three finish and low-amateur honors. The incoming junior at the University of Florida carded three eagles and three birdies in the final round to capture the honors.