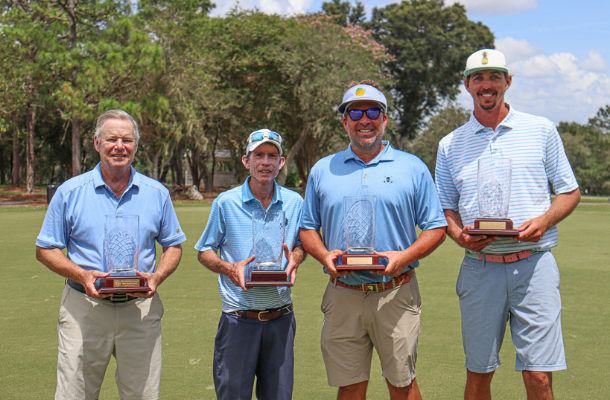 LECANTO, Fla. – Chip Brooke and Marc Dull captured the Championship Flight while Steve Sponder and David Anthony took first in the Senior Flight. Both victories were won by one-stroke and in wire-to-wire fashion at Black Diamond Ranch.

The duo of Marc Dull and Chip Brooke proved to be a strong team after an impressive round one score of  14-under 58. Playing in scramble format, Dull and Brooke carded 12 birdies and an eagle on the par-5 14th hole on the Quarry Course. Blanton Farmer and Scott Cox finished round one four-strokes back in second place with a 62.

Defending champions, Dull and Brooke, did not let the lead out of sight in round two. Turning at two under-par, Dull, of Lakeland, and Brooke, of Altamonte Springs, finished the final round with five birdies for a 65. After a round one 64, the team of Kelly Sellers and Tiger Godwin chased Dull and Brooke on Sunday. Finishing with a bang, Sellers and Godwin eagled the par-5 18th hole to finish with a 12 under-par 60 in second place. Dull and Brooke earned back-to-back wins, at the second Scramble Championship, by one stroke with a final 123 (-21).

David Anthony, of Plantation, and Steve Sponder, of Jacksonville, were the team to beat after taking the early lead with a round one 62. Ten birdies secured the round one lead by one over the teams of Mark Beckworth/Chris Leggett and defending champions, Brian Keenan/Paul Royak.

One less birdie in the final round secured the victory for Anthony and Sponder. Finishing at 19 under-par earned Anthony and Sponder the win by one stroke at 125. The team from Jacksonville, Beckworth and Leggett, posted a second consistent 63 to finish in second place at 18-under, 126.