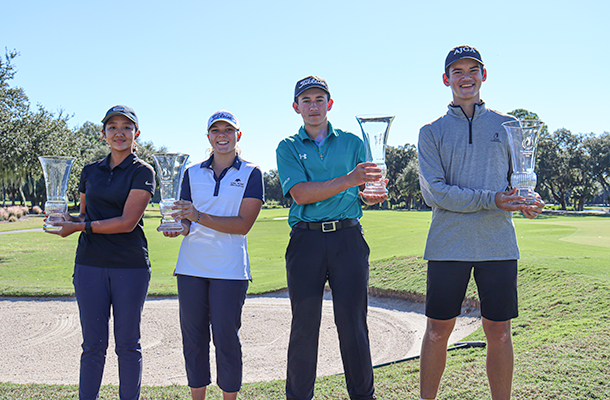 WINTER HAVEN, Fla. – After battling windy conditions this weekend, four players were crowned champions at the Florida Junior Tour Championship on Sunday at The Country Club of Winter Haven. Nicholas Prieto captured the Boys (16-18) division, while Clipper Salmon took home the Boys (13-15) title. On the girls’ side, Ryleigh Knaub won the Girls (16-18) trophy, and Chloe Chang secured the Girls (13-15) title.

Prieto secured the one-shot victory in the Boys (16-18) division, carding a 4-under 212 for the two-day championship. This is the second FJT victory of the season for Prieto and his first Tour Championship win, after finishing runner-up at the last year's championship.

"It means a lot to win this tournament," Prieto said. "It's great to finish up the last tournament of the year on a strong note against a really good field. It's nice to pull it off."

In Saturday’s first round, the Miami native posted a 1-under 71 to sit two shots back of the leaders heading into the second round. He carded second-round 69 to finish two shots back of the leader, Wyatt Plattner, heading into the final round. Plattner took the 36-hole lead after rounds of 69-69, finishing the second round with five birdies and an eagle.

In the final round, Prieto birdied the fourth hole to take the solo lead at 5 under. Plattner, who got off to a slow start in the final round, carded back-to-back birdies on Nos. 7-8 to take back the leader at 4 under.

Prieto, the 2021 Boys' Junior champion, added a birdie on the 14th to pull back within one shot of Plattner. A bogey for Plattner on the 17th gave Prieto the lead heading to the final hole. He rolled in a short par putt on the 18th to secure the victory.

Knaub used a final-round 71 to capture the win in the Girls (16-18) division, finishing the championship at 5-under 211. This is the second win of the year for Knaub, who took home an FJT at Palm Aire in March.

"This win means a lot to me, getting it in tough conditions and against a really strong field," Knaub said.

After a first-round 71, Knaub fired a 2-under 68 in the second round to take the 36-hole lead heading into the final round. She birdied the final hole of the day to take a one-shot lead over the field. Her second-round 68 was the low round of the championship.

The Debary native got off to a strong start in the final round, birdieing two of her first four holes, before making the turn at 1-under for the day. She played her second nine at even-par to finish the championship with a final-round 71 and earn the five-shot victory.

Salmon earned the victory in the Boys (13-15) division in wire-to-wire fashion, carding a 3-under 213 for the championship. After a number of top finish this season, Salmon takes home his first FJT victory of the year and his first FJT win since 2018.

"It means a lot to win because it's been about four years since I have, so to do it against such an amazing field and at this tournament feels really great," Salmon said.

He began the weekend with a 1-under 71 in the first round, following it up with a second-round 71 to take the 36-hole lead.

Beginning the final round with a four-shot lead, Salmon eagled the par-5 fourth hole and made the turn at even par. The Tampa native finished the day with a 1-under back nine, birdieing the 18th, to post a final-round 71 and secure the four-shot win.

Phillip Dunham fired a final-round 69 to earn a runner-up finish at 1-over 217, while Jaxon Brown took third place at 5-over 221.

Chang picked up the win the Girls (13-15) division, posting a 9-over 225 for the championship. This is the second FJT win of the year for Chang, who picked up a win at Heritage Oaks in May.

The Sarasota native opened the weekend with a pair of 76s to sit five shots back of the leader after 36 holes.

She got the final round started with a 3-over first nine, finishing the back side with a birdie on the 18th. Chang kept it rolling on her second nine, birdieing two of her first four holes. She rolled in 10-foot putt for par on the ninth to secure the victory with a final-round 73.

"I just kept making more putts and I realized that I was in a tie for the lead, and it really gave me a different perspective," Chang said. "It means so much to win because it's my first Tour Championship."

Layla Pedrique finished second, one shot back of Chang at 10-over 226. Katelyn Huber took home third place at 11-over 227