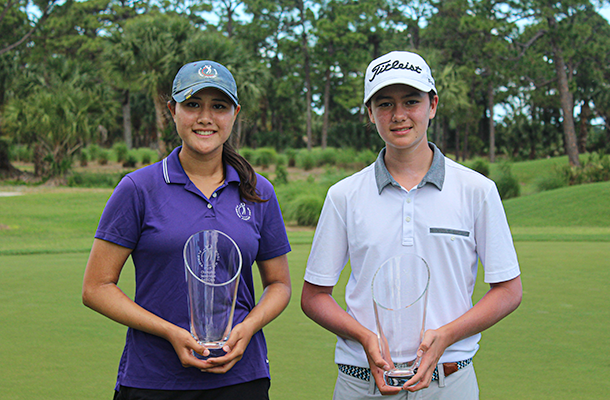 Vero Beach, Fla. - Arenui Faana and Tristan Wieland came out on top at the difficult Sandridge Golf Club this weekend. As reflected in the scores, the course showed it's teeth over the two days, but these two prevailed through the windy conditions.

The leaderboard was tight after Round 1 as Wieland & Asher Joseph both came in with a 73 (+1). Entering Round 2, the tournament was up for grabs, and it came down to the last few holes on Sunday afternoon.

After completing the front nine, Wieland found himself one shot ahead of Joseph, looking to hold onto his lead throughout the final nine holes. After both making par on 10 & 11, Wieland double bogeyed the 12th, forfeiting his one shot lead to Joseph, making them tied heading to the 13th tee.

Wieland quickly regained his lead with a bounce back birdie on the 13th, and never looked back, resulting in a two shot victory over both Asher Joseph & Mingbo Jiang. Although being 7 shots back heading into Round 2, Jiang's impressive round of 71 (-1) allowed him to claw his way all the way back for T-2 finish. This marks Wieland's first FJT Victory of the 2022 season, and the second of his FJT career.

Arenui Faana, was the only player in the field to shoot even par or better on Saturday, which resulted a favorably large lead of four shots heading into Sunday. With two birdies, two bogeys, and 14 pars, Faana was the definition of consisteny despite the difficult conditions.

Madison Lowenstein of Boca Raton, made things interesting after an opening nine of even par in Round 2, gaining two shots on Faana. Despite Lowenstein's best efforts and finishing with two closing birdies, Faana was able to take care of business on the back nine, to capture a three shot victory. Rounding out the top three was Hannah Hall who moved up five spots in Round 2 with the low final round in the Girls Division of 74 (+2).

Faana continues her impressive 2022 season by earning titles in back-to-back starts, and hopes to keep this hot streak going at Palm Harbor GC in a few weeks.