Balaji and Bacardi Triumphant at Grasslands 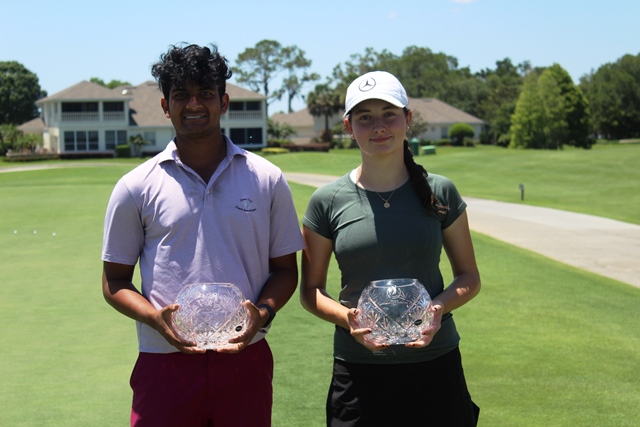 The winds were high on Saturday afternoon leading to extremely challenging conditions at Grasslands Golf & Country Club. Connor McCann would be the one to deal with the conditions the best on his way to a 2-under 70. McCann made the turn on Saturday 2-over par but he would open his back nine with birdie-eagle to get to under par on the day. A birdie on his final hole got him to 2-under which would be enough for a one shot lead on Jackson Hiller.

With better scoring conditions in the final round, many players would make their move towards McCann at the top. Mohit Balaji made birdie on three of his first five holes to gain a share of the lead as McCann made a birdie on the second hole as well. Balaji would bogey the 6th and 9th holes while McCann would make all pars on the front with his lone birdie on the 2nd hole to take a two shot lead to the final nine holes.

In a matter of two holes, that two shot lead would be lost by McCann. A bogey on the 14th by McCann followed up by a birdie on the 15th by Reggie Zhu would propel Zhu into a tie for the lead. Zhu had been making his way up the leaderboard thanks to four birdies on the day and with three holes left he saw him with a chance to win his third FJT event of the year. Meanwhile, Mojit Balaji with his 5 birdies on the day would find himself tied for the lead

Zhu’s bogey-birdie-bogey finish would put him in the clubhouse first at 1-under par. In the final group of the day, McCann would make double-bogey at the par-5 17th to drop him to even par for the event. Meanwhile, Balaji would go birdie-birdie to finish at 2-under and claim the Boys (16-18) Division. His tee shot on the par-3 18th would be within 5 feet leading to a birdie putt that he would make to win by one. Reggie Zhu’s 1-under par total would be enough for second while Connor McCann and Parker Bell tied for third.

In Round 1, Mi Li would have an up-and-down day to open up the tournament. Li made four birdies but also made five bogeys in the first round to start the weekend with a 1-over 73. That would be enough to lead the Girls Division over Siuue Wu.

Early in the second round, Remi Bacardi would make her move to the top. After a 76 in round one that saw her fail to make a birdie, Bacardi would birdie her second and fourth holes of the day. That coupled with Mi Li’s double-bogey on her opening hole and bogey on her fifth hole meant that Bacardi would take the lead through five holes in the final round.

Bacardi would go on to make two more birdies on her front nine as well as two bogeys. Meanwhile, Siuue Wu made a birdie on the par-4 16th to tie Bacardi at a 3-over par total. The two would make their way to the final nine holes of the tournament tied at 3-over par.

The 4th hole, the girls’ 13th hole of the day, would prove to be pivotal. Bacardi’s eagle to Wu’s bogey would be a three shot swing and Bacardi would take a three shot lead with 5 to play. Wu bounced back on 6 with a birdie while Bacardi made bogey, cutting the lead to one shot. A bogey on the final hole for Bacardi would leave the two tied with one hole left to play for Wu.

Wu’s approach shot on the final hole would miss the green. A pitch to 7 feet past the flag would leave a par putt to force a playoff. That par putt would slip by and lead to a bogey. With rounds of 76-71, Remi Bacardi would capture her second FJT of the year and first in the (16-18) Division. Siuue Wu finished in second place one stroke back while Katie Carman and Mi Li tied for third at 8-over 152.