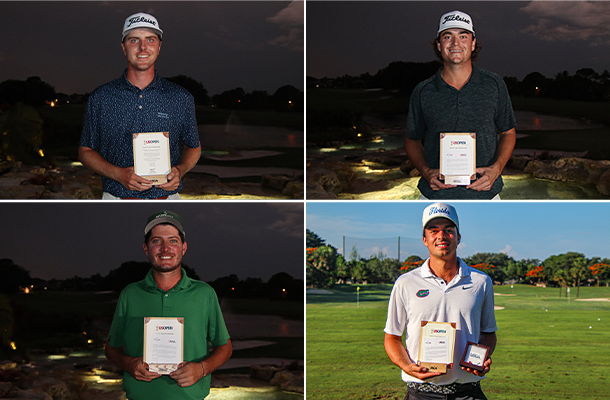 JUPITER, Fla. – Seventy-eight players began the day on Monday fighting for a spot in the 122nd U.S. Open Championship. Thirty-six holes later, four players are headed to The Country Club.

Ryan Gerard, Sean Jacklin, Keith Greene and Fred Biondi advanced to the U.S. Open on Tuesday through final qualifying, conducted by the Florida State Golf Association, at The Club at Admiral’s Cove.

It will be the first U.S. Open Championship for all four competitors. Gerard and Jacklin shared medalist honors, while Biondi earned Low-Amateur honors.

Gerard and Jacklin shared medalist honors Rodgers put together two strong rounds at his home course in Jupiter, finishing the championship at 7-under 137. He got off to a hot start, birdieing the second hole. The Indiana native added five birdies to card a first-round 69.

Jacklin was the last man in the field at the final qualifier, getting in as an alternate for the final group of the day. He made the most of the opportunity, carding a first-round 66 with seven birdies and three-straight on Nos. 16-18.

The Scotland native kept it rolling in the second round, birdieing five holes on the front side. He ran into some trouble on the back nine, but held on to post an even-par 71 and grab a share of medalist honors at 5-under 137.

Gerard also got the day started with a 5-under 66 in the morning round. He finishes the round with a bogey-free second nine with three birdies. The North Carolina native got off to a quick start in the final round with back-to-back birdies on the first and second. He posted an even-par 71 to earn share of medalist honors and punch his ticket to the U.S. Open.

Greene put together round of 70-68 to advance to the U.S. Open Championship. He finished the first round with a bogey-free back side with a birdie on the 11th for a first-round 70. The Texas native posted a final-round 68 with four birdies to secure a spot at The Country Club.

Biondi was the lone amateur who qualified for the U.S. Open, finishing with a 3-under 139. He began the day with a 1-over 72. The Brazil native fired a bogey-free 67 in the final round with four birdies and sat in a tie for fourth when he finished the round at 3-under 139.

Play was suspended for darkness on Monday night with two players still to finish, both within two shots of Biondi for the final qualifying spot. Play resumed on Tuesday with both players finishing at 1-under 141 to secure a U.S. Open spot for Biondi.