There is an acronym used around the golf administration realm that sadly describes most competitive golfers. The acronym is “PDR” and stands for “players don’t read.” At every tournament and qualifier, we hand out or email a few pieces of paper. The information on the papers is very important. Most players just look for the hole locations and ignore the other information on the sheets. Ignoring this information can come back and bite you during the round.

What are all these papers?

Normally, we hand out, or email, the following documents at every competition: 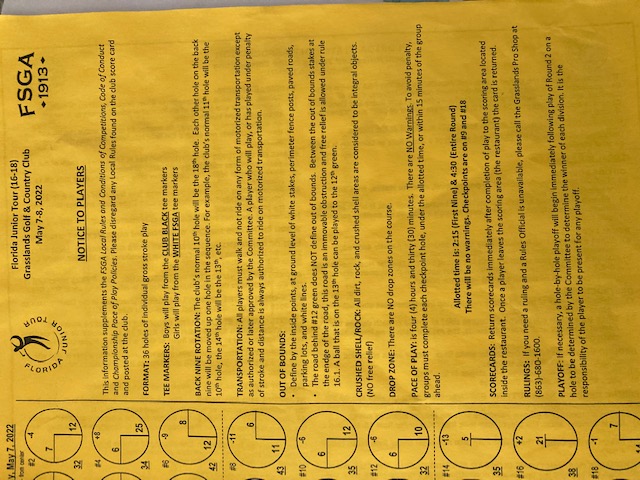 Notice to Players – these are Local Rules that are in place for that day and that competitive round.  This is the most important document. It includes things like what defines out of bounds, location of drop zones, status of crushed shell areas, etc.

Hard Card (Local Rules & Terms of the Competition) – these are the Local Rules that are in effect for every FSGA competition. It includes things like edging grooves around putting greens, ant hills, status of walls in penalty areas, etc. The Notice to Players may override some items on the Hard Card.

Evacuation Plan – where to go if play is suspended.

Examples where reading would have helped...

1) A player’s tee shot found the water on a long and difficult par 3 over water. The player played again from the tee and found the water once again. His fifth stroke found the putting green. As he was driving to the green, he noticed a drop zone on a forward tee, which would have been a much easier shot. If the player had read the Notice to Players, he would have known of the drop zone.

2) A player’s approach shot to a green went long, rolled across a road, and came to rest on the next hole. The player assumed the road define out of bounds so he returned to where his last stroke was made and played under stroke and distance. If he had read the Notice to Players, he would have known that the portion of the road behind the green did not define out of bounds.

3) On a dogleg par 4, a player decided to play his tee shot down an adjacent hole. When he reached his tee shot, an Official drove over and informed him he is out of bounds. The player questioned why, and the Official showed him the Notice to Players sheet where it explained that there was internal out of bounds between those two holes and how it was defined with stakes. The player returned to the tee hitting his third shot.

Have a great month of August!