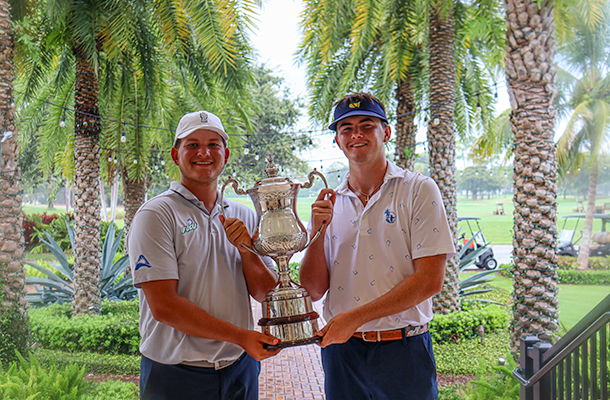 BOYNTON BEACH, Fla. – Cooper Smith and Austin Cherichella survived two playoff holes to capture the 73rd Four-Ball Championship on Sunday at The Club at Quail Ridge. The team finished the weekend 19-under 125 and secured the victory with a birdie on the second playoff hole.

This is the first FSGA championship win for both Smith and Cherichella.

Beginning the final round in a tie for the lead, Smith and Cherichella got the day started with a 5-under front side. Cherichella birdied two the first three holes, while Smith added birdies on the fourth, fifth and ninth.

The duo posted a 32 on the back side, with two birdies from Smith and an eagle on the par-5 13th for Cherichella, to finish the day with a final-round 63. They sat in a tie for first at 19 under with TJ Shuart and Scott Turner.

After a first-round 64 for Shuart and Turner, the pair started the final round with a front-nine 30, with two birdies from Turner and two birdies and an eagle from Shuart. They finished the day with five birdies on the back side for a final-round 61, the low round of the day, to force a playoff with Smith and Cherichella.

Smith and Cherichella birdied the second playoff hole to capture the Four-Ball victory, while Shuart and Turner finished runner-up. Defending champions, Sampson Zheng and Grant Drogosch, finished third at 17-under 127.