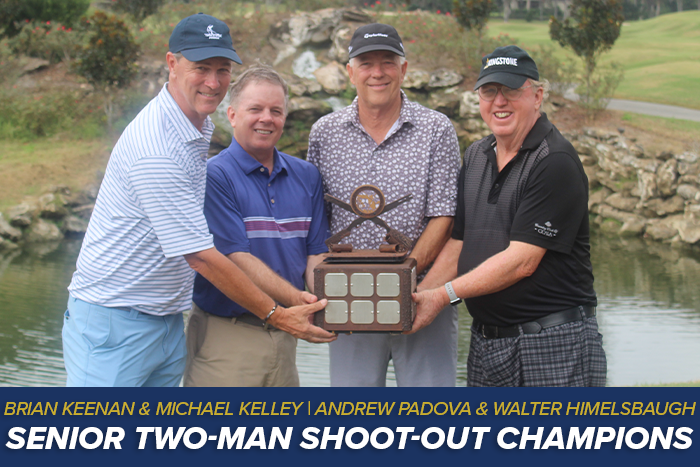 OCALA, Fla. – Brian Keenan and Michael Kelley took home the Senior Two-Man Shoot-Out title on Friday at the Country Club of Ocala, posting a 12-under 204 to win the championship by two strokes. The Super-Senior title was won by Walter Himelsbaugh and Andrew Padova, who finished at 13-under 203 on the week.

This year’s championship began on Thursday morning as teams competed in modified alternate shot. Frank Brady and Tom Myers shot 5-under 67 in their first round and held a five-shot lead over Keenan and Kelley and a seven-shot lead over the third-place team of Randy Kroen and John Madden.

In the Thursday afternoon scramble portion of the tournament, nine teams shot 7-under 65 or better. Keenan and Kelley were one of these teams, shooting an 8-under 64 to share a second-round lead with Brady and Myers at 8-under 136. Low round of the day went to William Ruegge and Bruce Sands, who scorched the course for a 12-under 60 and sat just two shots back of the leaders after the second round.

Teams teed up Friday morning in a four-ball format for the championship’s final round. Keenan and Kelley finished their week with a bogey-free 68 to secure the championship by two strokes. A final round 6-under 66 helped Bradley Rollinson and John Milton secure a runner-up finish at 10-under 206.

After the first round modified alternate shot, Dan Bogdan and Dan Gladman held a two-shot lead, firing a 2-under 70. This was good for a two-shot lead over two teams, Bob Levy and Steven Stuetzle as well as Himelsbaugh and Padova.

Peter Gibbons and Erick Holt shot an impressive 10-under 62 in the scramble portion Thursday afternoon to get into a tie for the lead at 8-under 136 with Levy and Stuetzle who shot a second-round 8-under 64. First-round leaders Bogdan and Gladman sat in a tie at 7-under 137 with Himelsbaugh and Padova, one shot back of the leaders.

In the final round, Himelsbaugh and Padova posted a 6-under 66 to secure a two-stroke victory. They finished two strokes ahead of three teams that tied for second place, Gibbons and Holt, Levy and Stuetzle, and finally James Starnes and Bert Kosup, who had the low round of the day with a 9-under 63.