The Florida Women's State Team has been selected 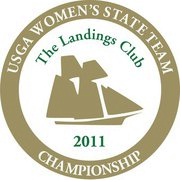 The Florida Women's State Team has been announced.  Meghan Stasi, Tovie St. Louis, and Wendi Golden have been chosen to represent our state at the USGA Women's State Team Championship.  The championship will be held on the Palmetto Course at The Landings Club in Savannah, Georgia on October 4-6.

Stasi, St. Louis, and Golden were selected based on the Player of the Year point standings that have been earned throughout the last year of competition.  The season closed out at the Four-Ball Stroke Play Championship, August 6-7, at Grand Harbor Golf and Beach Club.  Golden and her partner claimed the title, and St. Louis and her partner followed with a third place finish.  Both were able to gain a significant amount of points to qualify them for the Florida Team.

Beth Sholar will serve as the Florida Team Captain.