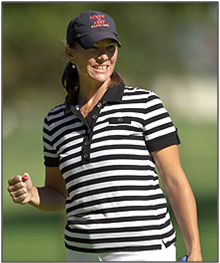 After coming off strong finishes at the Harder Hall Invitational and Women’s South Atlantic Amateur, placed 8th and 13th respectively, Stasi was able to continue her momentum at Coral Ridge.  She took out Charley Hull, world’s number six golfer and defending champion, during Thursday’s quarterfinals, and was victorious over UK’s Harriet Beasley in the semi-finals.

In the finals, Stasi was 2-up through six when Green turned it around.   Green birdied seven and took advantage of Stasi’s three-putt bogeys on eight and nine to go 1-up.  Stasi rallied back to tie the match with a birdie on 12, then went 1-up again at 15 when Green found trouble.  On 18 Stasi was able to close out the match with a two-putt par from 20 feet.