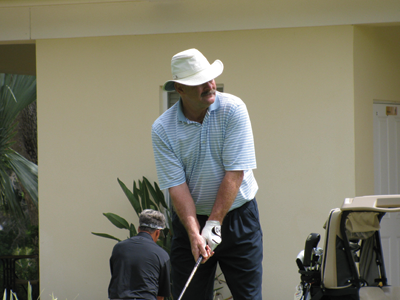 Don Bell, of Port Orange, and Rick Woulfe, from Fort Lauderdale, posted a tournament total of 16-under par 128 to capture the first Championship of the 2012 season. In the first round, the pair fired the low round of the Championship with an impressive round of 11-under par 61, to hold a four stroke lead heading into the final round of play.  Bell and Woulfe continued their stellar play in the final round posting a five-under par 67, which was good enough for a three stroke victory.

The team of Frank Babusik, of Jupiter, and Robbie Dew, of Palm Beach Gardens, and the team of Randy Lewis, of Alma, and Bill Zylstra, of Ocklawaha, finished tied for second place with a tournament total of 13-under par 131. The Defending Champions, Robert Hess, of Casselberry, and Doug Snoap, of Apopka, finished tied for fourth place with a tournament total of seven-under par 137.

The field included 42 teams of one partner over 55 years of age and the other between 25-54 years old. In the Championship, competitors played 36 holes of four-ball stroke play over the course of two days.