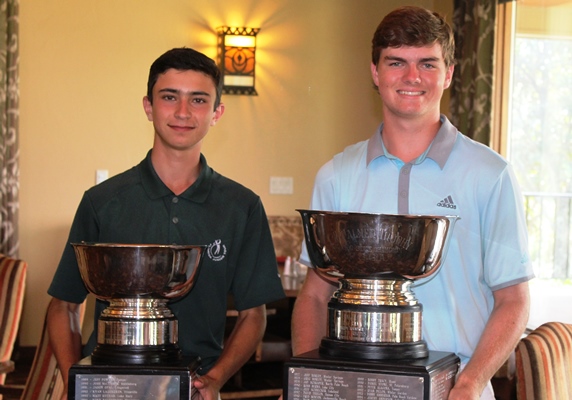 Round 1 saw Andre Leveque, of Windermere and Greyson Porter, of Clearwater both took advantage of the Highlands/Ranch Course firing 5-under-par 67’s to share the overnight lead in the 16-18 Age Division. In the 13-15 Age Division, all players took on the Quarry Course on Day 1. Eugene Hong, of Sanford would jump into the lead, opening with 68, while Manuel Girona, of Windermere would sit one behind opening in 69.

Day 2 saw things swing in the 16-18 Age Division, Bryce Burke, of Orlando, who opened with 68 at Highlands/Ranch would come over and post 71 on the Quarry Course to take a one stroke lead into the final round over 3 players, while in the 13-15 Age Division, Manuel Girona posted 67 at Highlands/Ranch to open up a 4 stroke lead over first round leader Hong, and 5 strokes over Alberto Martinez, of Weston.

The final round of the 13-15 Division began with Manual Girona with a commanding 4 stroke lead over Eugene Hong. A birdie on the first for Girona would extend that lead to 5 as he moved to -9 for the event. However, Girona was unable to carry momentum forward from the first 37 holes of the Championship and quickly faltered, making 5 bogeys on the outward 9, and 3 more coming in to post a final round 79. Playing alongside Girona, Alberto Martinez would quickly jump out to the lead, making 3 birdies on the front 9 and turning at -6 for the Championship. Fellow competitor Eugene Hong, would lurk for a while as well. After Hong birdied the par 5, 14th and Martinez made par, the lead was only one. Martinez would then convert birdies on 15 & 17 to walk to the 18th tee with a 3 stroke lead and the Championship locked up. Brandon Mancheno, of Jacksonville, posted a tournament low 66 (-6) in the final round to take 3rd place honors at 2 under-par for the Championship.

The 16-18 Division provided fireworks and lots of lead changes on the final day. Leader Bryce Burke, would bogey the first hole, while Phillip Knowles made birdie in the group ahead to share the lead. As the front 9 went on, Knowles would move to -6 for the tournament after a birdie on 7 and a two-stroke lead at the time. After a bogey on 9 by Knowles, and a birdie by Anton Serafini, of Lake Mary, both players would turn to the back nine at -5 and tied for the lead, while Austin Hitt, of Longwood was lurking just behind at -4. Serafini would bogey the 10th, and continue to slide with two more bogeys on the back 9 and post a final round 73 to finish T5. Knowles would make back to back bogeys on 11 and 12, but bounce back with a birdie on 14 to get back to -4. However, failed to convert birdie opportunities on the final four holes, and would finish 3rd. Michael Mattiace, of Jacksonville made the biggest charge, after a bogey on 12, he was -1 for the tournament and all but out of it, however once he stepped into the Quarry, it was game on. Mattiace would birdie 4 of his last 5 holes to post -5 and be the leader in the clubhouse with two groups on the golf course. Austin Hitt, who hung around the lead all day, finally took a share of the lead on the 13th with a birdie to get to -4. When he birdied the par 5, 14th to get to -5, he was the new solo leader. Once Hitt found the middle of the fairway on 18, he knew Mattiace had just made birdie ahead to tie him at -5. Hitt’s second shot was just off the putting surface about 40 feet from the hole. A delicate chip slid just below the hole, leaving Hitt an uphill 4 foot birdie attempt for the win that he would drain and capture the 16-18 Age Division at the 61st Boys’ Junior Championship!

The 61st Boys' Junior Championship will head to Black Diamond Ranch in Lecanto. The Championship has a rich historic tradition with past champions including Matt Kuchar, Gary Koch, Len Mattiace, Blayne Barber, and recently Sam Horsfield and Andy Zhang. In 2015, participants will have the opportunity to experience two beautiful golf courses, the Quarry and Ranch, that wind through canyon walls, change elevation, and embody scenic views. For a look at the 2014 Championship Results click here. Late entries are subject to a $10 late entry fee should the entrant gain acceptance into the qualifying field.

Those individuals who advance to the Championship through qualifying must pre-register and remit an additional $120 Championship Fee either at the FSGA website or by check to the FSGA office. Payment must be received by Monday, June 29, 2015 by 3:30 pm, or the individual will be withdrawn from the Championship. 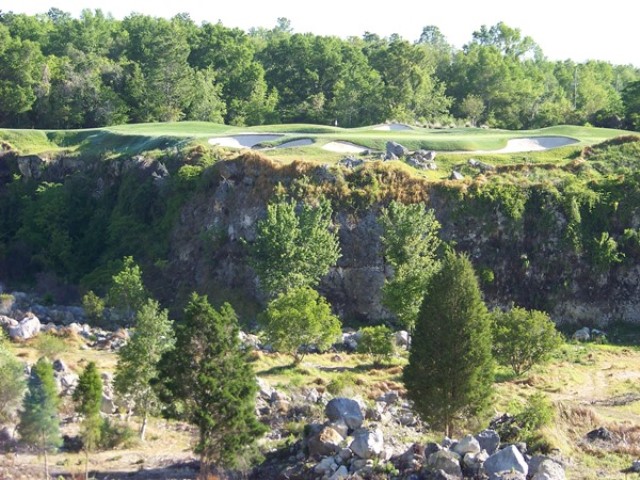 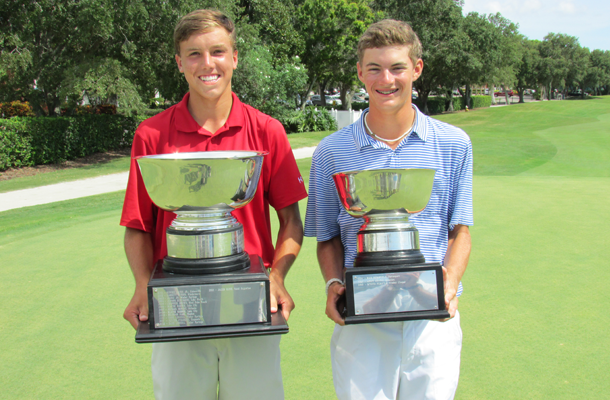 Practice rounds are available six days prior to the Championship on a space available basis at either golf course. Players' ages 16-18 can ride, players' ages 13-15 will need to be accompanied by a parent to ride in a cart. The price for a practice round is $30.00 + tax. If a parent is playing a practice round with their junior it will be a fee of $65 (standard guest of member rate). Please call (352) 746-3446 to arrange your practice round. The proper place to practice your golf swing is on the driving range, hitting multiple shots on the course is unacceptable.

Hampton Inn - Crystal River
$109 per room, per night plus tax