Ivy Steinberg, of Stouffville, Canada, stole the round one lead after battling the firm greens at Vero Beach Country Club. Despite her double bogey on hole 18, Steinberg was pleased with her score of 78 and one stroke lead over Lisa Schlesinger, Diane Lang, Tama Caldabaugh, and Laura Carson tied for second place. Mary Jane Hiestand, two-time defending champion, finished round one tied for eighth place with a score of 82.

Wednesday’s round led to an exciting finish with lower scores and a change at the top of the leaderboard. Steinberg faltered during round two, falling to tenth 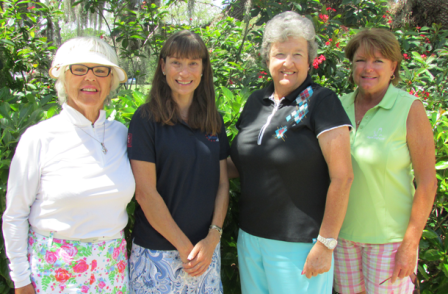 place with a tournament total 162. Lisa Schlessinger, of Fort Myers started round two with a different game plan, “I really need to focus on hitting greens” she said. Schlesinger did just that to climb from second place and capture the Women’s Senior Amateur Championship with a round two score of 75, four strokes better than Tuesday’s round. When asked about how it felt to win her first FSGA event, Lisa stated, “I’m always practicing and trying to improve, so it is nice to see a win come out of that”. Mary Jane Hiestand fought to seize second place by one stroke with a 74 finish, 156 tournament total. Taffy Brower, 2014 Hall of Fame inductee, earned first place honors in the Senior Championship First Flight with a tournament total 165.

In the Super-Senior Division, Nancy Chaffee, of Avon Park, never let the lead out of her sight during both rounds. Chaffee posted a 78, the lowest score of the day, to finish in first place, six strokes ahead of Kathie Westlund and Janet Field in second place. Chaffee followed up her first round with a final round of 85, for a  total of 163, to capture the Super-Senior Championship title. Chaffee, who finished the Super-Senior Championship in third place last year, described her win by stating, “there are a lot of really talented ladies here in Florida. This just really feels incredible”. Kathie Westlund, of Fort Myers, captured second place, while Janet Field finished in third place with a total of 173.

The Senior Field Division, crowned two winners on Wednesday. In the First Flight, Meredith Blinn, of Sarasota, fired a tournament total 164 for a first place victory. Palm Harbour resident, Mary Lou Edwards, claimed first place in the Second Flight with a 174 total, two strokes ahead of second place. The Super-Senior Field Division crowned Nancy Hersey, of Greenacres, the champion due to her even-par total.

Vero Beach Country Club, located in Vero Beach, home of the best Florida beaches on the Treasure Coast, is the venue for the Women's Senior Amateur Championship. Not only does the Senior Amateur offer great competition between the top senior women amateurs in the state, but there are beachside restaurants, boat or kayak tours of the Indian River Lagoon, and the historic downtown Vero Beach to enjoy after the round. Click the picture below to learn all that Vero Beach has to offer!  For a look at the 2014 Championship Results Click Here. $175
*Entry fee includes all competitive rounds of golf, lunch after the final round, and gift certificates. Late entries will be accepted subject to a $10 late entry fee should the entrant gain acceptance into the field.

Players must be 65 years or older as of April 7, 2015 to be eligible to play in the Super-Senior Division, if they so choose.  There will be both a Championship (Gross) and Field (Gross & Net) Division in each age bracket.  Players must select which Division and Field they wish to compete in upon entry.  No player may play in both age brackets or Divisions within age brackets.

The Championship Divisions may be flighted after the first round based upon scores.

The Field Divisions will likely be pre-flighted based on individual handicaps and the number of competitors.

Generally, divisions of more than 10 individuals will be flighted, however the Committee reserves the right to flight based on the number of individuals and/or the range of combined individual handicaps or scores. In the Super-Senior Division, Tinker Sanger, of North Palm Beach, was crowned 2014 Champion. Sanger consistently kept her first place lead after round one to finish with a tournament total 167, three strokes ahead of Diane Armet. Armet finished in second place followed by Nancy Chaffee and Kathie Westlund who were tied for third with a tournament total 170.

The SpringHill Suites in Vero Beach will serve as the host hotel for the Women's Senior Amateur. The discounted rate for FSGA Players is $155 per room per night. For reservations please call 772-978-9292, and identify yourself as an FSGA Competitor. For more details on the hotel, please click here.