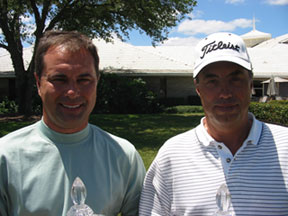 The South Florida team of Bill O'Keefe and Frank Babusik went wire-to-wire winning the 4th Senior/Mid-Amateur Four-Ball Championship at Rio Pinar Country Club in Orlando on April 21-22. After the first round, the pair led the field by one stroke shooting a 63.

O'Keefe, of Fort Lauderdale, and Babusik, from Pompano Beach, posted a 68 in the final round to win the Championship with a 131 tournament total. The Temple Terrace duo of Kim Schwencke and Don Whittemore placed second two strokes back from the Champions. Schwencke and Whittemore carded a 70 in the first round and jumped ahead with a final round 63. David Hopkins, from Plantation, and Philip Meng, of Orlando, recorded consistent scores of 66-68 for third place.

Gary Mackintosh, of Palm City, and Lenny Loyd, of Port St. Lucie, claimed the first flight shooting a 71-69--140. The field included 52 teams of one partner over 55 years of age and the other between 25-54 years old.

In the Championship, competitors played 36 holes of four-ball stroke play over the course of two days. Rio Pinar is host to many FSGA events and was home to the PGA Tour's Florida Citrus Open, now at Bay Hill. 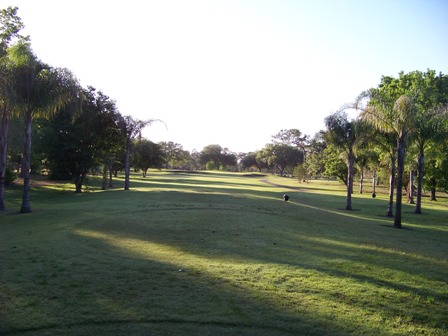 Rio Pinar Country Club is the home course of the UCF Men’s Golf Program and has hosted many professional and amateur events. Designed in 1957 by Mark Mahanna, the course showcases large oaks, 43 bunkers and a winding canal which runs through five holes.

Eoghan O'Connell, of Palm Beach Gardens, and Woodrow Smoak, from Palm City, shot 69-64--133 at The Fox Club in Palm City to win the Championship.