Jonas & DeMorat Tied for the Lead 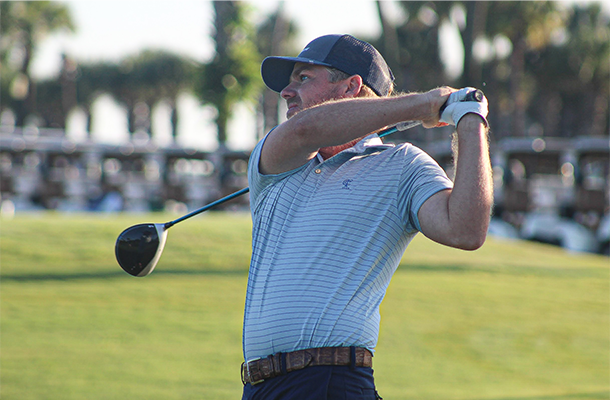 PALM COAST, Fla. –  John Jonas and Mickey DeMorat went low in the first round of the Florida Open Championship. In total, 156 players teed it up on Friday at Hammock Dunes Club on the Creek and Links Courses.

Jonas and DeMorat both fired a 7-under 65 to hold a two-stroke lead over the field, with Jonas playing on the Links Course and DeMorat on the Creeks Course.

The 2015 Florida Open champion, Jonas began the day with a bogey-free front nine and four birdies. He continued his strong play on the back nine, finishing the day with birdies on four of the five final holes.

DeMorat, the low professional at last year’s championship, got off to a quick start with back-to-back birdies on the second and third holes and finished the front nine at 2-under. The Merritt Island native closed out the round with a bogey-free back nine, carding five birdies.

“If I can keep hitting the ball the way I did today, hopefully I can be there in the last few groups on Sunday,” DeMorat said.

Cory Howard, Justin Bertsch and Rod Perry all sit in third place at 5-under 67 after the first round. Playing in the same group at the Creek Course, Perry, the 2011 Florida Open champion, and Bertsch both finished the day with six birdies. Howard made his way up the leaderboard on Friday with three birdies and an eagle on the par-5 15th hole at the Links Course.

Six players finished the first round in a tie for sixth place at 4-under.

The second round will begin on Saturday  morning with tee time beginning at 7:30 a.m. Live scoring is available on here. A complete recap with full results will be posted on FSGA.org following the day's play.