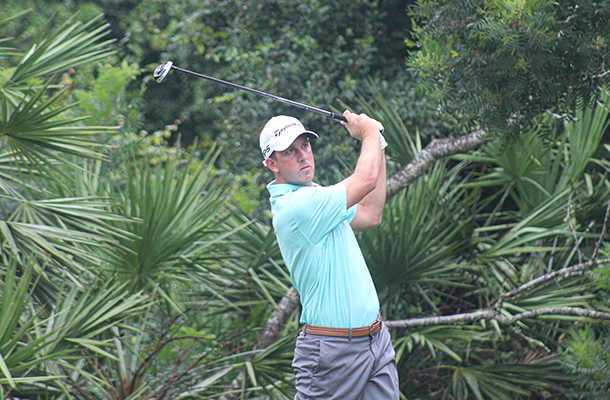 PALM COAST, Fla. –  After posting the low round yesterday, Mickey DeMorat continued his strong play on Saturday at the 73rd Florida Open Championship to finish the day at the top of the leaderboard. DeMorat carded a 4-under 68 on the Links Course at Hammock Dunes Club to move to 11-under 133.

“I’ve kind of been cruising, trying to hit the fairway and getting myself a look at birdie. Trying to limit the mistakes and let the birdies come to me,” DeMorat said.

DeMorat, who was the low professional at last year’s championship, began the day with a bogey-free first nine and a birdie to move into solo first place. He birdied two of the first four holes on his second nine and added an eagle on the sixth hole.

His only hiccup was a bogey on the seventh, but he finished the day with two pars to hold a three-stroke lead over the field.

Cory Howard and Ryan Orr sit in a tie for second after the second round at 8-under 136. Howard followed up his first-round 67 with a 3-under 69 at the Creek Course. He started the day with a 1-under on his front nine, before capping off the round with a bogey-free 2-under back nine.

“It was a nice, solid 69. Try to roll in a couple more putts tomorrow to make up those three stroke,” Howard said.

Playing the Links Course, Orr played the first four holes of the day at even-par and closed out his front nine with three-straight birdies. He added three more birdies on his back nine to finish the day at 4-under 68 and move up the leaderboard.

“I’ve played in FSGA events since I was 10 years old. I’ve gotten to know everyone here, and it’s just a really great organization. It would mean a lot to win this,” Orr said.

Dennis used a second-round 4-under 68 on the Creek Course to move within four shots of the leader. The University of North Florida assistant coach posted a bogey-free round with four birdies.

Sixty-four players made the cut at even-par 144.

The final round will begin on Sunday morning with tee time beginning at 7:30 a.m. Live scoring is available on here. A complete recap with full results will be posted on FSGA.org following the day's play.