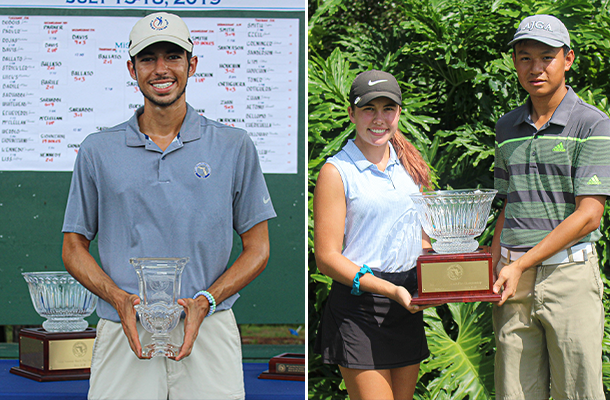 Mann was victorious in the Girls 13-18 Division with a 5 and 4 win over Amelie Alcantara in the championship match. Chen used a 3 and 2 win over Andrew McLauchlan to win the Boys 13-15 Division.

Boys 16-18
The 2018 Junior Match Play Champion, John DuBois captured medalist honors on Tuesday, carding a 4-under 140. He fired a second-round 67 to earn the No. 1 seed heading into match play. Cooper Smith picked up the No. 2 seed spot with a 2-under 142, while Zikang Zhan finished third at 1-under 143. Sarhaddi finished in a tie for fourth with Ethan Werblo at 3-over 147. Carson Parker and Yoshi Petersson finished the stroke play round in a tie for 32nd at 12-over 156, with Parker grabbing the final spot in match play.

Mi Li took home medalist honors, finishing the two rounds of stroke play with a 6-over 150. Madison Tenore finished one stroke back of Li at 7-over 151, while Jordyn Hodgson posted a 10-over 154 to finish in third place. Mann picked up the No. 6 seed, finishing in a tie for sixth with Annie Zhang at 13-over 157. Sixteen players advanced to the match play portion of the championship.


Carson Brewer earned the No. 1 seed with an even-par 144. He fired a first-round 69 to open up stroke play seeding. Andrew McLauchlan and Bryce Werblo finished tied for second at 5-over 149. Chen secured the No. 9 seed with a 10-over 154. Andrew Wexler and Neil Heinlein finished the first two rounds in a tie for 16th at 15-over 159. Heinlein grabbed the final spot in match play on the first playoff hole.

Boys 16-18
Parker upset the No. 1 seed and medalist, DuBois, in the first round of match play, winning 1 up. Sarhaddi advanced to the Round of 16 with a decisive win over Alex Whitehead, 6 and 4. No. 28 seed, Louis John Giovacchini picked up a win against No. 5 seed Werblo in 19 holes. Smith played his way into the Round of 16 with a commanding 5 and 4 win over Jacob Ezell.

Boys 16-18
Sarhaddi kept it rolling in the Round of 16, overcoming Thomas McClellan, 3 and 1. Giovacchini used another upset victory to advance, defeating Campbell Kennedy 4 and 3. Buckelew defeated Ian Ball, 1 up to advance to the next round.


No. 16 seed Madyson Gold upset the No. 1 seed, Li, in the first round with a 1 up victory. Mann used a 1 up win over Kavya Ajjarapu to advance to the quarterfinals. Tenore, the No. 2 seed, picked up a commanding 8 and 6 victory over Ashleigh Angelo.

Boys 13-15
Medalist, Brewer advanced after a 5 and 4 win over Heinlein, while Chen won his match against Sebastian Sacristan, 1 up. Gabriel Zhang upset Maxmilian Jelinek in the Round of 16 with a 1 up win.

Boys 16-18
The Quarterfinals saw Sarhaddi defeat McClellan, 3 and 1, while Giovacchini kept it going with a 4 and 3 win over Kennedy. Smith was victorious in 20 holes over Derek Sanderson. Buckelew defeated Ball 1 up.

Girls 13-18
Mann took down the No. 3 seed Hodgson in the quarterfinals with a 3 and 2 victory. No. 16 seed, Gold, advanced to the semifinals with a 2 up win over Kiley Malmberg. Alcantara defeated Laura Lou, 4 and 3.

Boys 13-15
Chen upset the No. 1 seed Brewer in the Quarterfinals, with a 1 up win, while Zhang also completed an upset, defeating Sebastiano Mascia, 2 and 1. McLauchlan used a 2 and 1 win over Andres Atrio to move on to the semifinals.

Boys 16-18
After being knocked out in the quarterfinals at the last two Match Play Championships, Sarhaddi punched his ticket to the finals with a 3 and 2 win over Ballato. He took a three up lead on the front nine and secured the victory by winning the 14th hole. Buckelew secured his spot in the finals with a 4 and 2 win over Smith. He won three holes on the back nine to earn the victory.

Boys 16-18
Sarhaddi got off to a strong start in the finals, winning three holes to head to the back nine 2 up on Buckelew. The incoming University of Central Florida freshman won three straight matches to start the back nine at 5 up and eventually capture the championship.

Girls 13-18
Mann won five holes on the front nine to take a quick 5 up lead over Alcantara at the turn. After Alcantara took the 12th hole, Mann came back to take the 13th hole with a par and secured the victory by halving the 14th.

Boys 13-15
Chen took a quick lead over McLauchlan, winning two of the three first holes. McLauchlan won the eighth hole and headed to the back nine 1 down. Chen won the 15th and 16th holes to secure the win.

The junior schedule will continue with the Junior Team Championship on August 3 - 4 at PGA National Resort & Spa in Palm Coast Gardens.