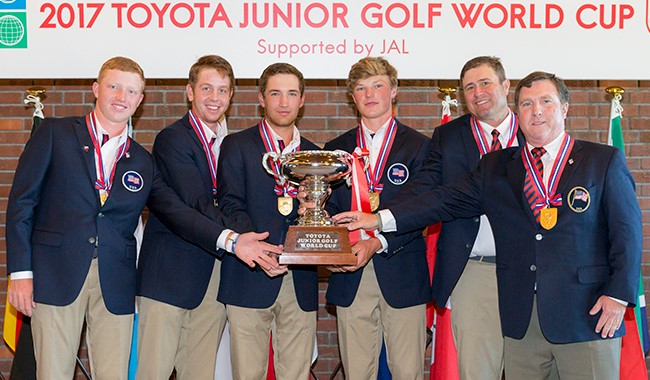 2017 Junior Player of the Year

Brandon Mancheno, of Jacksonville, is the Junior Player of the year for the second time in the last three years. He previously won this prestigious award back in 2015. Needless to say, Brandon was locked in for the 2017 season. First, he set his sights on the 100th FSGA Amateur Championship which was held at The Bear’s Club and Lost Tree Club. Brandon was tied for the lead after the first two rounds and finished in solo second. Next, he eyed down the US Junior and US Amateur Championships. A 64 in qualifying would earn him medalist honors for the US Junior. At the Championship, Brandon would make match play and fall in his opening match. Again, qualifying as medalist for the US Amateur, Brandon then went to California where he failed to make the cut. The highlight of his season came in a trip to Japan as part of the gold medal winning USA team at the Toyota Junior World Cup. Currently a Freshman and a key contributor to the Auburn University Golf Team, Brandon only needed eight months of eligibility to earn Junior Player of the Year honors. Congratulations to Brandon, we wish you all of the best with your collegiate golf career.

2015 Junior Player of the Year

2015 was a special year for Brandon Mancheno, of Jacksonville. After a breakthrough capturing the 2014 FJT Tour Championship and his first win in December, Mancheno started 2015 on fire. In January, he would finish second and third in two starts. February, Mancheno would earn his first victory of 2015 at Gainesville CC. In two events in March, he posted a second and tied for third finish. One April start would have him finish tied for seventh, his only finish outside the top three on the season. In May, he would end the spring FJT season with a tie for third and a win at the Orange County National 54-Hole Major.

At the Boys' Junior Championship, the Auburn University commit would struggle with an opening 75, but recover with closing 73 and 66 to finish alone in third place. In Brandon's first of two USGA Championships, Brandon would head to Colleton River Plantation, in South Carolina, and capture Stroke Play Medalist honors at the U.S. Junior Championship in July and advance to the Round of 32 before being eliminated. At the U.S. Amateur, Mancheno would post rounds of 76 and 75, but unfortunately fail to advance to match play. Brandon's first fall start on the FJT saw him finish second at Rocky Bayou CC and then claim the victory at Adena Golf and Country Club on November 15th.