The Florida State Golf Association and the FJT takes great pride in the conduct of its players and the relationships that it has with the golf clubs in Florida. 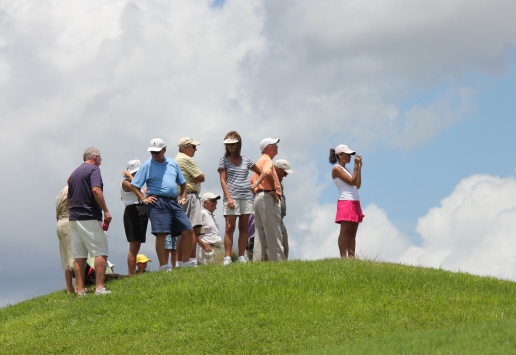 Our players, their parents, friends and relatives are expected to act as ladies and gentlemen at all FJT events including practice rounds, competitive rounds, dinners and other functions.

Spectators must observe the same golf etiquette and respect to the golf course, facilities, and policies of the host club as the players.

Watching an FJT event as a spectator is a privilege. Whether you are a parent or a friend of a player, your spectator privileges may be suspended if you fail to follow the spectator guidelines.

Your child or friend is attempting to play top-level competitive golf and this is NOT the time for any coaching. Quietly follow players and keep your expressions of joy and/or disappointment to a minimum. Please do not embarrass your child in front of other players and spectators. Smoking and drinking alcoholic beverages should be kept at a minimum at all events - cigarette butts look horrible on the golf course and smoking sets a poor example for the kids - enjoy the fresh air and exercise!

All spectators must dress in appropriate golf attire or clothing of a similar nature.  Blue jeans, t-shirts, tank tops, short-shorts, flip-flops and other overly casual attire should NOT be worn at any FJT function. Gentlemen should remove hats when entering the clubhouse, pro shop or grill. All attire must also meet club guidelines.

Cell phones should not be used on the course except for checking the time. Please turn off all electronic devices or set them to silent. Calls may be returned at the clubhouse by cell phone at a later time (if the club permits). Some host clubs do not allow cell phones on their property.

Spectators who need to talk with a player (for health reasons and handing them sunscreen, food or beverages) should do so in front of other spectators and/or players.

Advice and the Rules of Golf

Rule 1.3b (1) states "Players are responsible for applying the Rules to themselves."

Rules Officials are stationed on the course to assist players when they are unsure how they should proceed, to monitor pace of play, and for emergency situations. Players and spectators should notify an Official when someone needs assistance.

Most Officials are volunteers and the number of Officials per event will vary. When there is no Official nearby to assist, players should play a second ball under Rule 20.1c (3). Remember - it is the player's responsibility to know the Rules!

When an Official is assisting a player all spectators should stay at least 25 yards away and should not get involved in the conversation. Spectators will be brought into a situation only if asked by the Official.

Spectators should not confront Officials. If a spectator has a question, or information for an Official, it should be done away from the players and in a calmly manner.

"Advice is any verbal comment or action (such as showing what club was just used to make a stroke) that is intended to influence a player in choosing a club, making a stroke, or deciding how to play during a hole or a round. Advice does not include matters public information, such as the location of things on the course (hole, putting green, Fairway, penalty areas, bunkers, or another player's ball), the distance from one point to another, or the Rules."

Spectators are NOT encouraged to give information on the Rules to players because frequently the information is incorrect and/or Rule 10.2 (Advice) is breached. Violation of the Rules will typically lead to a penalty for the player(s) involved.

General Penalty for a breach of Rule 10.2 is: loss of hole in Match Play; or two strokes in Stoke Play.

How to Properly Observe a Group (Where you should stand & walk)

(Failure to follow these policies can result in your cart being taken away at any time and may result in your privileges being suspended for future events.)

Appreciation of Club Staff and Officials

It is appropriate to express your appreciation to the host club, its staff and the FJT officials conducting the event. Please recognize that your actions may influence the future ability of other junior golf organizations to use the club and it is your responsibility to be a gracious ambassador of junior golf. Set a great example for your child and all the people present: