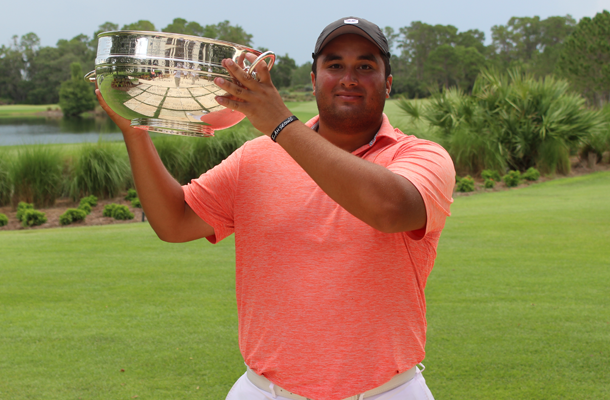 2018 Amateur Player of the Year

Since capturing the 2014 Amateur Championship, Lench has found much success collegiality but had been struggling in 2018. Facing adversity again at the 101st Amateur Championship. Having held the lead on the back nine on Sunday , Lench found himself one stroke behind after Marc Dull birdied the par-5 17th hole. Lench came up clutch, hitting his approach to 6 feet and executing the putt to force a play-off. Lench would go on to win with a par on the second play-off hole.


One month later, Gabe found himself in familiar territory, but this time did not make it as interesting. Leading by one stroke heading into the final round of the 72nd Florida Open at Innisbrook, Lench never faltered. He kept a clean card on the front nine, while much of the field found trouble. On the back nine, he made his lone bogey on the 12th hole, but carded birdies on the 11th and 15th holes. The birdie on 15th put him two strokes ahead of Joe Alfieri. Lench would go on to win with a two stroke victory.

He ended the summer with a runner-up finish with Chase Ibbotson at the Four-Ball Championship.

2014 Junior Player of the Year

Lake Mary’s Gabriel Lench is the 2014 Junior Player of the Year. At the Amateur Championship, Lench hoisted the Amateur Trophy posting a six-under par total of 282 for a two shot victory. In the Boys’ Junior Amateur Championship, Lench recorded his season low of 64 in round one to finish in fourth place for the tournament. He added two Florida Junior Tour victories, in the 16-18 Age Division, at Amelia National Golf Club and Sugar Mill Country Club. Finally, Lench had the opportunity to travel to French Lick, Indiana to represent Florida in the USGA State Team Championship, registering the low total of the team, where Team Florida finished in second place.