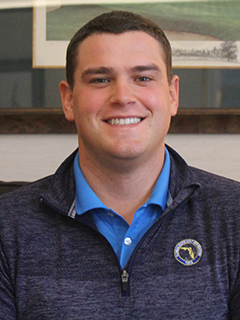 Kyle DiGiacobbe was born and raised in suburban Philadelphia, playing golf throughout his childhood and was strongly involved as a participant and volunteer with The First Tee of Greater Philadelphia.

His golf highlight came qualifying to play in the 2008 Wal-Mart First Tee Open at Pebble Beach.  DiGiacobbe first came to the Tampa area to attend Saint Leo University in Dade City 2009-2013 and worked at Lake Jovita G & CC during his time at Saint Leo.

He was a P.J. Boatwright Intern with the Pennsylvania Golf Association in the summers of 2012 & 2013 before coming to the FSGA in July of 2013. During his free time, DiGiacobbe enjoys following both Philadelphia and Tampa’s pro sports franchises and playing golf with friends.