On Friday, November 16, 2007, the Florida State Golf Association inducted Jack Veghte into its prestigious Hall of Fame. The ceremony was held at Interlachen Country Club in Winter Park in conjunction with the Annual Dinner.

Born and raised in New York, Jack Veghte was introduced to golf by caddying for his father at the young age of 12. He quickly took up the game and began playing competitively. In 1953, he won the New York State High School Golf Championship and earned a golf scholarship to Florida State University. At 22, Jack won the 1957 New York State Amateur Championship and also graduated from FSU with a Bachelor of Business Administration degree.

After graduation, Jack remained in Florida and settled in Clearwater to open an insurance agency. He continued playing golf, winning the 1968 Florida State Amateur 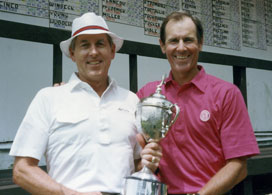 Championship at the age of 33 and proceeded to capture the title again in 1970 and 1975. Jack also won three Florida State Senior Championships: 1991, 1993 and 1999, and the 1991 and 1992 Senior Four-Ball Championship with partner Bo Williams. Jack was runner-up twice in the Southern Amateur and finished second in the State Amateur five times. He also qualified for the US Amateur twelve times advancing to the quarterfinals in 1975, and qualified for the US Senior Amateur five times also with a quarterfinal best finish in 1990. He was the Amateur Champion of the Americas in 1966 and 1968.  Additionally, he had International Four Ball Championship victories in 1964 and 1965 and was the amateur member of the winning U.S. Pro-Am team in 1968. Overall, Jack has won 165 tournaments, including the traditional Gasparilla Tournament five times, and set five course records. In 1983, Jack was inducted into the Florida State University Athletics Hall of Fame.

Jack served two terms as FSGA President in the 1980's as well as served on the Board of the Southern Golf Association and Society of Seniors. Jack was also involved with the USGA as a member of the Sectional Affairs Committee.