Rick Woulfe has been a household name in the world of Florida amateur golf over the past 30 years. He has amassed 15 state championship victories in his career and is a 12-time FSGA Player of the Year. 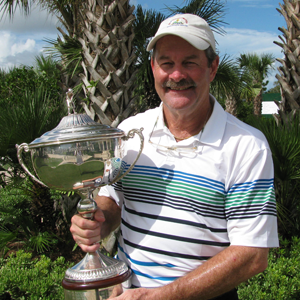 When it came time for college, he headed north to Michigan State University. Woulfe put together a standout college career in East Lasing. He earned All-American honors, led the Spartans to the NCAA Championships for four years and helped Michigan State win its first Big Ten Championship.

The summer after his senior season, Woulfe played in every amateur tournament he could. While he played well that summer, he hadn’t won anything and he realized professional golf wasn’t for him. Golf moved to the back burner for the next 10 years, as Woulfe went to law school at Washington and Lee University and moved back to Florida to start his career.

In 1981, Woulfe learned about a new USGA championship, the U.S. Mid-Amateur Championship for players 25 and older. This was all it took to get Woulfe back into competitive golf, qualifying for the first time in 1983.