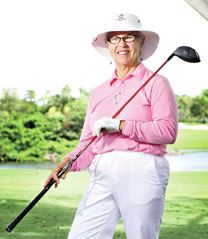 On Friday, November 21, 2014, the Florida State Golf Association inducted Taffy Brower into its prestigious Hall of Fame. The ceremony was held at Palma Ceia Country Club in Tampa in conjunction with the Annual Dinner.

Taffy Brower was born in Rochester, New York where she began playing golf at the age of seven. Taffy fell in love with competition and was the Women’s Rochester Distric t Junior Champion three times. In 1969, she finished runner-up in the New York State Women’s Amateur at the age of 18. During the next ten years, Taffy played sparingly while raising her two children, Aaron and Kristen, with her husband Buzz. In 2004, Taffy earned the first Florida Women’s State Golf Association Player-of-the-Year award. In that year Taffy won both the Southern Amateur and Southern Senior Amateur Titles. When she isn’t preparing for her next tournament, Taffy enjoys spending time with her family and attending church.