New to the Rules Game; Start with the Basics

There are some basic principles that don’t change. Here are four that won’t steer you wrong.

“Play the Ball as it Lies” - Start by hitting it from the teeing ground and do not touch it until the ball is holed unless the Rules allow you to touch it. For instance, the Rules allow you to mark the position of the ball and lift it when it’s on the putting green. The Rules also give you the option to lift the ball when you have interference from a cart path or a puddle of casual water among other things. Otherwise, keep hitting it without touching it until you get it into the hole. 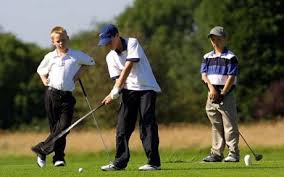 “Play the Course as You Find It”- Part of the challenge of the game is to negotiate the course and its obstacles. If your ball is behind a tree or a building, you need to go around it; not through it! If you have an uneven stance or a water hazard between you and the hole, you can’t pile dirt to level your stance or build a bridge over the hazard. Don’t change the course; adapt to the course and change your route to the hole.

“Let it Roll on its Own” - If a ball is in motion after a stroke, don’t put anything in its way to change its path. That includes you stopping or deflecting it with your foot or a club. Also, while a ball is rolling, do not lift anything from its path that might alter its course such as moving a stick or stone, a soda can or piece of paper, or even a rake left on the course. A couple of notable exceptions, a flagstick when removed or any of your equipment can be moved out of the way of the moving ball.

“Start and Finish the Hole with the Same Ball” - The Rules will not allow you to substitute your shiny lucky putting ball when you get on the green. On occasion the Rules will allow you to substitute a ball; sometimes with and sometimes without a penalty. Obviously if you lose it in a water hazard, out of bounds or in a large puddle of casual water you can substitute a new ball. Or, if your ball is stuck up a tree and irretrievable, you may substitute a ball instead of being forced to climb the tree. Hit it, find it, hole it and then change balls for the next hole if you wish.

Stick with these four principles and you’ll have a leg up on the crowd.

And don’t forget to look at the section in the front of the Rule Book called “A Quick Guide to the Rules of Golf”. It’s the Reader’s Digest version of the Rules that will cover all of the most common situations.

Remember, use the definitions, index or the table of contents to find the correct Rule that applies to the situation and follow the Rules of Golf to help yourself to enjoy the game of golf.