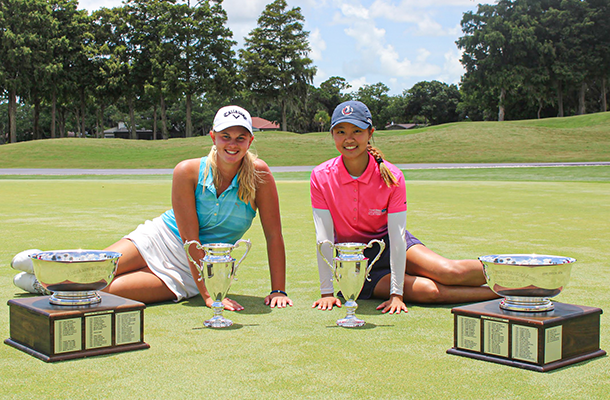 
BRADENTON, Fla. – It was Ellen Dong and Kaitlyn Schroeder who came out on top on Thursday at the 61st Girls’ Junior Amateur Championship at Bradenton Country Club. Dong captured the 16-18 Division with a 1-under 213, while Schroeder was victorious in the 13-15 Division at 7-under 207.

Starting the day with the lead, Dong began the round with five-straight pars, before adding a birdie on the sixth hole. After making the turn with a two-shot lead, a double bogey on the 10th dropped Dong into a tie for first with Chloe Schiavone. A key birdie on the 11th hole brought the Longwood native back into first place at even-par.

“My putting was definitely the strongest part of my game this week,” Dong said. “Today, it really saved me a lot of strokes. I was able to save par on a lot of holes.”

Casey Weidenfeld had a slow start to the day, bogeying three of the first five holes. She turned it around with an eagle on the par-5 eight hole. The Pembroke Pines native added a birdie on the 17th to move into a tie for first with Dong at even-par, heading to the final hole.

Finishing the final round with an even-par 71, Dong captured the first FSGA championship win of her career.

“This is just a confirmation of my practice and hard work over the past couple of months,” Dong said. “It's a really big win.”

Weidenfeld finished with a runner-up finish at even-par 214, posting a final-round 70, while Schiavone took third place at 1-over 215, carding a 71 in the final round.

Schroeder began the round in second place, six shots behind the leader. She got off to a fast start with a birdie on the second hole to move to 1-under for the championship. The Jacksonville native chipped in for birdie on the fifth to pull within three shots of the lead. Making the turn at 1-under, Schroeder put together a phenomenal bogey-free back nine, carding four birdies and an eagle.

“The 10th hole was a turning point for me,” Schroeder said. “When I made that five-foot putt for par, I knew that was a big putt. Jordan [Fishcer] was in the trees on the 11th and I knew if I could do something there that I could start flipping the momentum.”

“This means a lot,” Schroeder said. “Winning an FSGA event is always something special, especially being from Florida.”

This is Schroeder’s second FSGA championship victory. She becomes the 11th play to win back-to-back Girls’ Junior titles and the first to do it since Erica Stoner in 2012.

Fischer, who was the 36-hole leader, took home a second-place finish at 1-under 213. The North Fort Myers native struggled in the final round, posting a 5-over 76. Bridget Ma secured third place at 1-over 25 with a final-round 71. 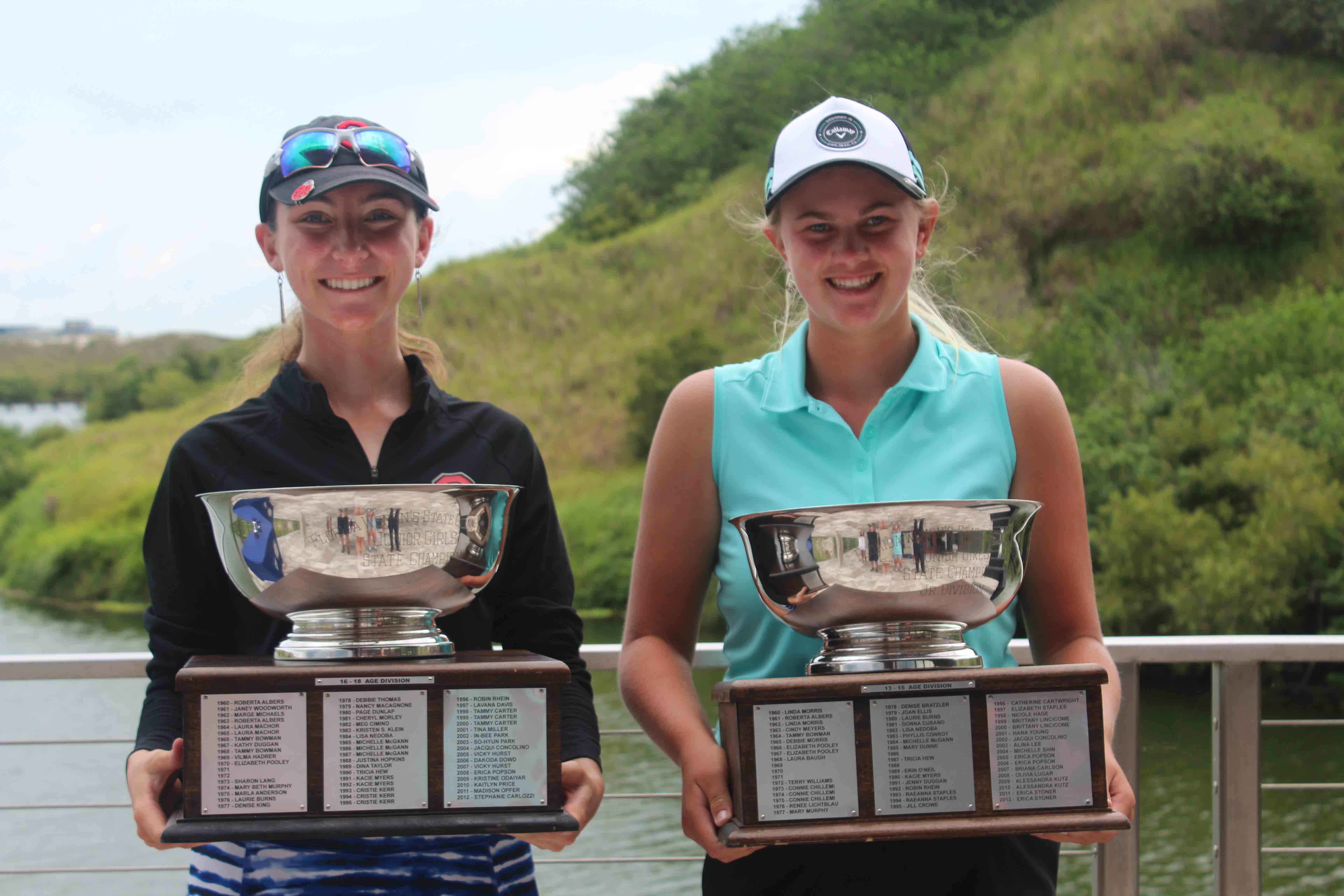 $175 - Entry fee includes all competitive rounds of golf and tee gift. Late entries will be accepted subject to a $10 late entry fee should the entrant gain acceptance into the field.

The Championship is ranked by the World Amateur Golf Rankings and Junior Golf Scoreboard.

Practice rounds are available one week prior to the Championship and after 12:00 PM on the weekend prior on a space available basis at either golf course. Players' ages 16-18 can ride, players' ages 13-15 will need to be accompanied by a parent to ride in a cart. The price for a practice round is $30.00 + tax. Please call 941-792-4159 to book your practice round at Bradenton Country Club & 941-708-3617 to book at River Strand Golf & Country Club. The proper place to practice your golf swing is on the driving range, hitting multiple shots on the course is unacceptable. 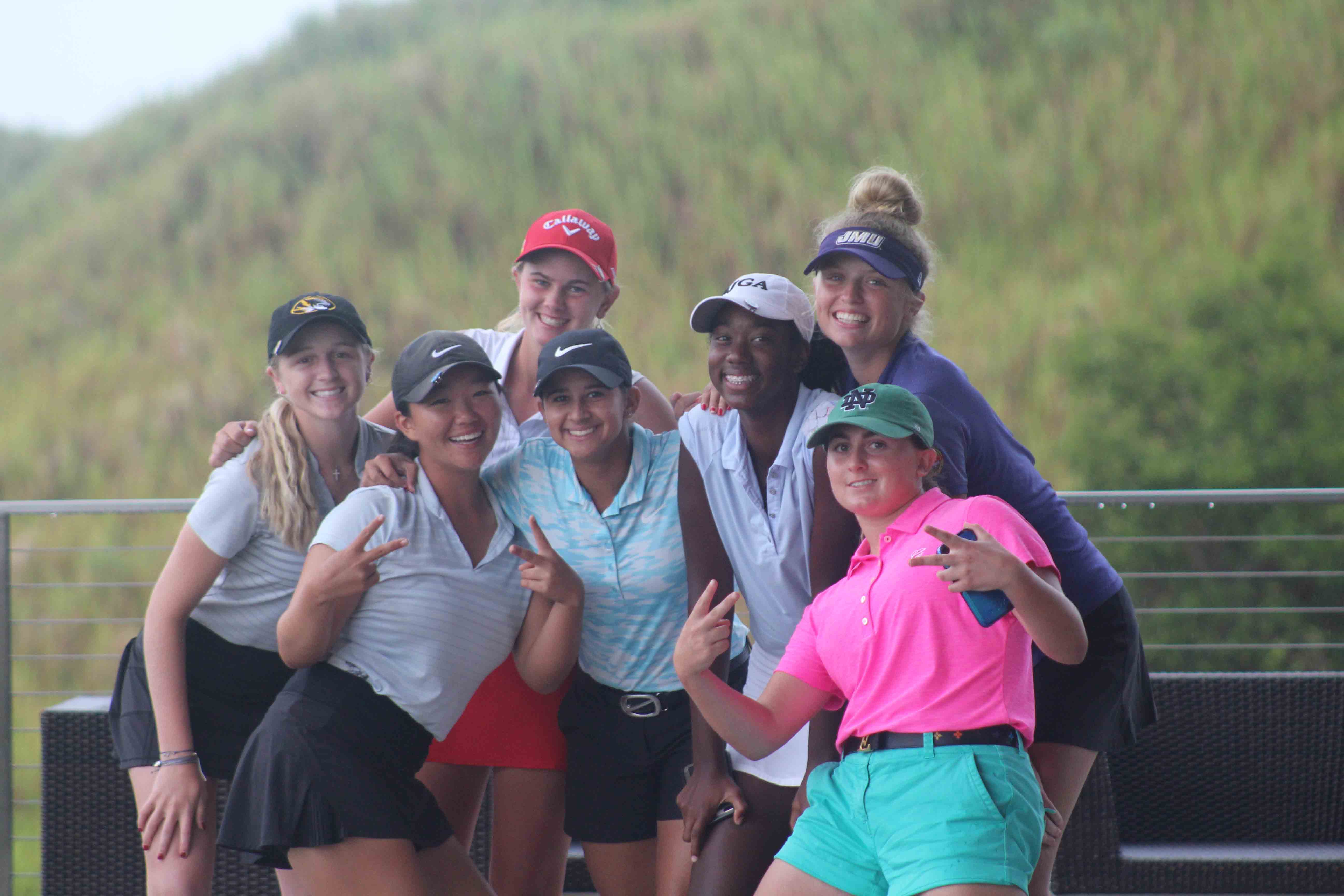