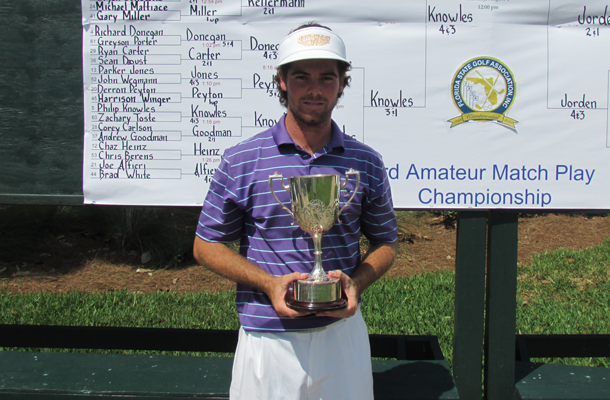 In the finals, Kevin Jorden, of Juno Beach, secured the title beating Philip Knowles, of Bradenton, in 21 holes. After a back and forth battle through 11 holes on Sunday afternoon, Knowles took control of the match by winning holes 12 and 13 to take a commanding 2 up lead with five holes to play.  After halving the 14th hole, Jorden swung the momentum his way by winning holes 15 and 16 to square the match. After Jorden’s 15 foot birdie putt just slid by the edge of the cup on the 18th hole, the match would head for extras. Jorden and Knowles would halve the 19th and 20th holes with pars and would head for the 21st hole. Knowles hit a great greenside bunker shot to secure his par, giving Jorden an opportunity to win the title. After surveying the putt from many angles, Jorden drained the 18 foot birdie putt to win his first State Championship.

En route to the finals, Jorden and Knowles each won five matches to meet Sunday afternoon. Jorden, who earned the 14th seed after posting a 71 in the seeding round, defeated Osten Waite, from Ocala, 2 and 1 in the round of 64. Jorden defeated joseph Trey Aguirre, of Navarre, 3 and 2 to advance to the round of 16 and then defeated Shane Convery, of Ponte Vedra, in 19 holes to earn his spot in the quarterfinals. Playing Jamey Salmon, from Jacksonville, Jorden won 4 and 3 to advance to the semifinals. On Sunday morning, Jorden ousted Austin Powell, from Jupiter, 2 and 1, to face Knowles in the final match.

More than 300 players attempted to qualify at one of seven sites across the state. In the qualifying stage, players competed in 18 holes of stroke play in hopes of reaching the Championship at Timuquana Country Club. The Match Play Championship begins with an 18-hole seeding round to seed the 64 player field. Single elimination match play follows to determine the Match Play Champion. Full Story

The Amateur Match Play Championship is an exciting event that utilizes golf's original match play format.  There are 7 qualifiers slated throughout the state to provide players the opportunity to qualify for this prestigious championship.  Timuquana Country Club, one of Florida's oldest and most historic clubs, will play host to the championship this year.  Founded in 1923 this course has hosted numerous FSGA Championships as well as the U.S. Senior Amateur Championship in 2002.

Male amateurs must be a member of the FSGA 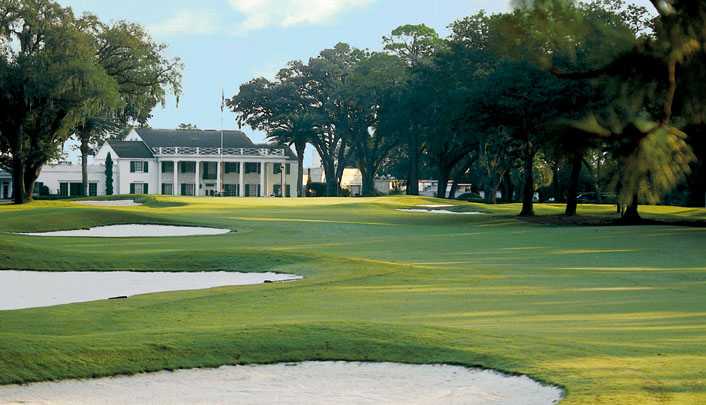 Must have a handicap index no higher than 11.4.

$160 ($170 - members who do not have an active FSGA/GHIN Handicap). Exempt Fee includes Championship Fee and Entry Fee for those individuals eligible for exemption. (See below)

18 holes stroke play at 7 sites. During qualifying, each player must use a golf cart. Caddies are acceptable, but he/she may not ride in a golf cart or carry the player's clubs. Players are responsible for cart fees for all practices rounds. 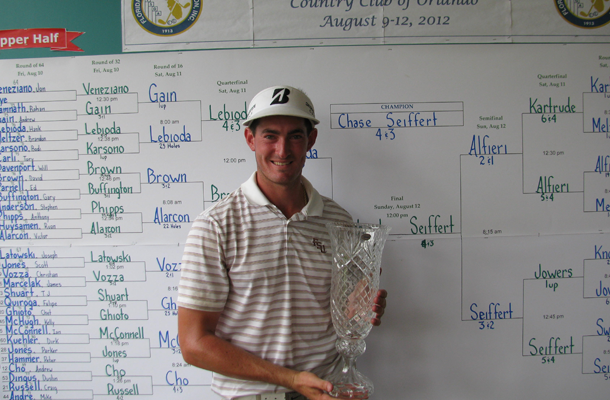 Chase Seiffert, of Panama City, defeated Hank Lebioda, from Winter Springs, 4 & 3 at The Country Club of Orlando, in Orlando.

Practice rounds are available one week prior to the championship.  Practice rounds may be played after 12:00 PM on the weekend.  The price for a practice round is $30.00 + tax.  Please call (904) 386-0477 to arrange your practice round.  The proper place to practice your golf swing is on the driving range, hitting multiple shots on the course is unacceptable.

Players in the following categories will be exempt from the seeding round and will be directly placed into the Championship flight provided they meet all entry and eligibility requirements.

Click here for information on how alternates may gain entry into the Championship.

Please click the View Hotels tab in the Tournament Links section for hotels in the Jacksonville area.

Timuquana Country Club will accept cash and Visa/MasterCard for payment.