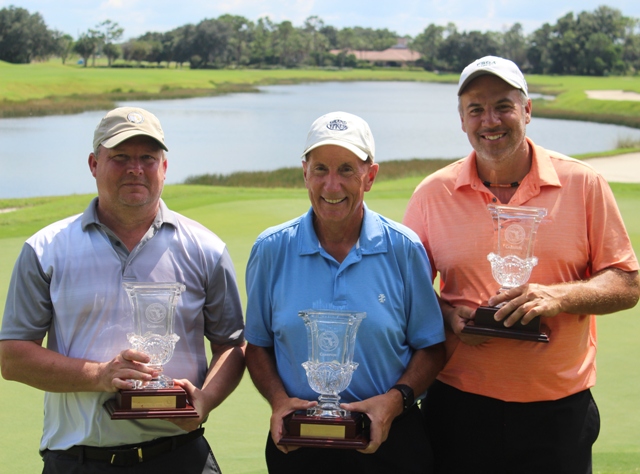 Under 50 Division
Kris Vassallo, of Bradenton, earned his first FSGA Championship win in wire-to-wire fashion. A round one 69, with five birdies and a net eagle, earned Vassallo the early lead by one stroke over Mike See. Another net eagle in Vassallo’s second round of 74 secured his victory at one under-par 143. Two strokes back tied for second place finished Shane Fairchild, of Bradenton, and Mike See, of Palm Harbor. Fairchild carded an impressive two net eagles for a round one even par and followed up with a 73 in round two to finish at one over-par 145. Mike See, who posted a day one 70, remained in second place after a round two 75.

50-64 Division
The leaderboard was lit by red numbers at the top after round one. Ricardo Gonzalez, of Weston, played strong right out of the gate, carding three gross birdies, two net birdies, and a net eagle to secure the early lead at five under-par 67. Despite his great play in round one, Gonzalez fell to a round two 82 and tied for seventh place finish at 149 with Carlos Lamarche. Robert Shourds, who lingered close behind after a round one 70 played steady in round two to climb up the leaderboard. Shourds, of Palm Harbor, scored four net birdies and two gross birdies to finish round two at one under-par.  A three under-par 141 total earned Shourds his first FSGA Championship win by one stroke. Graham Tomlinson, of Lake Mary, posted two net eagles over two rounds to finish in second place at two under-par 142.

65 & Over Division
Ron Bauman and Robb Dillinger tied at the top after round one scores of fiver under-par 67. Dillinger, of Fort Myers, could not hold onto the lead after a round two 74 and finished in third place at three under-par 141. Bauman did not let first place out of sight as he posted seven net birdies in round two to finish with a 73. A four under-par 140 finish secured Bauman’s second Men’s Net victory, by one stroke, after winning the Championship in 2016. John Christensen, of Wesley Chapel, claimed second place, at three under-par 141, after a total of three net eagles over the course of the Championship.

The New Course is Jack Nicklaus’ tribute and homage to the famed Old Course at St. Andrews, Scotland. This Scottish links masterpiece is complete with double greens, stone bridges and walls, gorse mounds, burms and pot bunkers as deep as 12 feet. The North-South combination, marked by sharply ledged fairways, tall shaggy mounds and plateau greens perched above water or sand, is a demanding, target-style test. Click here to learn more about Grand Cypress Resort. For a look at the 2018 Championship results click here.

Entries are processed after your 3rd One-Day is complete and a score is posted, first come first serve. 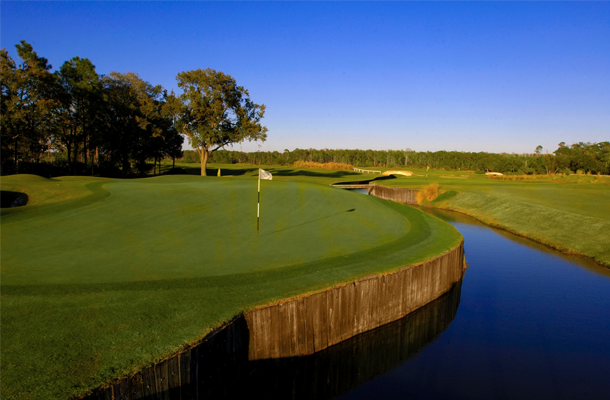