The FSGA went south this weekend for the 68th Four-Ball Championship. Held at Trump National Doral in Miami, 48 two-man teams teed it up Saturday morning hoping to conquer the difficult Blue Monster course and come out on the top of the leaderboard. 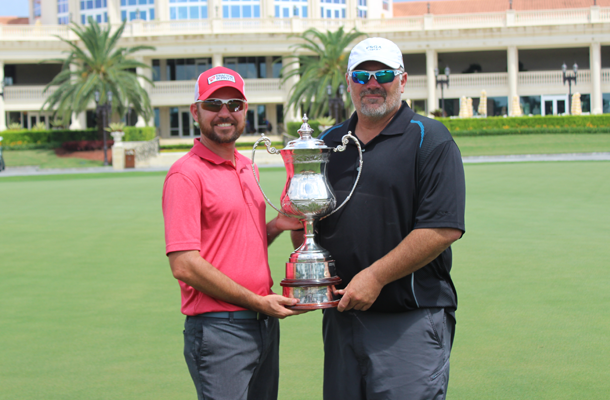 Coming into the first round, the early favorite was the Alfieri team of Joe and Cade. Joe Alfieri was already a three-time Four-Ball Champion when he won with then-partner, Doug LaCrosse from 1999-2001. Another team who could possibly finish on top was Tiger Godwin and Kelly Sellers. Godwin and Sellers played together and finished runner-up in last year's Four-Ball Championship.

The first round of competition Saturday morning took place on the Golden Palm course and proved to be slightly the easier of the two courses. Two teams posted 66's and were tied at the top of the leaderboard after day one. The two-man dream team of reigning Player of the Year, Joe Alfieri and his son Cade posted one of the leading 66's while the second 66 was shot by Garrett Morrison and Lucas Carpenter of Jacksonville and St. Cloud, respectively. Closely behind the Alfieri and Morrison/Carpenter teams after shooting a 67 in the first round was the Godwin/Sellers team. Tiger Godwin of Fort Meade and Kelly Sellers of Lakeland started off a little shaky with a bogey on the par-5 fifth hole, but bounced back with six birdies and just one additional bogey on 17 to finish their first round with a four-under par round of 67.

With 32 teams finishing the first round either even or under par, Sunday's finishing round on the Blue Monster was guaranteed to be a show with lots of moving around on the leaderboard. The two man team of Godwin and Sellers came out of the gate strong with a birdie on the first hole yet with a bogey on the fourth, they would drop back to even-par for the round. Their turning point in the round, however, came on the sixth hole where they would birdie hole six, eagle hole seven, and birdie hole eight to move dramatically up the leaderboard at the turn. Going out in a four-under par, 32, Sellers and Godwin made one birdie followed by one bogey to finish their concluding nine holes at even-par. Their second round total of four-under par, 68, paired with their first round score of 67 finished them at 135 and good enough to take the championship by two shots.

Finishing alone in second place was the father-son team of Joe and Cade Alfieri. Leading after the first round, the Alfieri's struggled the second round and shot just one-under par to finish the tournament at 137, two back. Rounding out the top three was the two man of Christian Bosso of Orlando and 99th Amateur Champion, Jacob Huizinga of Pensacola. The Bosso/Huizinga duo played consistently throughout the entire event and posted consecutive 69's to finish alone in third.

Even though Godwin and Sellers four-ball score of 135 might have been good enough to win the tournament, it was the highest winning score relative to par since 2006, proving Trump National Doral put even the most talented golfers to the test. 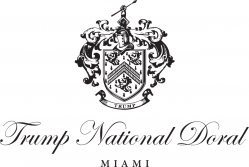 The 68th Four-Ball Championship will be played at the uniquely designed Trump National Doral Miami Golden Palm and Blue Monster Courses. The Blue Monster is known as one of golf's iconic courses while the Golden Palm has recently been redesigned and is gaining notoriety. Enjoy two rounds of golf in the heart of South Florida at the distinct Trump Nationla Doral Miami. For a look at the 2016 Championship Results click here.

Round one was originally scheduled on the Red Tiger Course; however, it was moved to the Golden Palm course due to course maintenance.

Those teams who advance to the Championship through qualifying must pre-register and remit an additional $220 per team at the FSGA website, www.fsga.org. Payment must be received by Monday, July 24 at 3:30 pm, or the team will be withdrawn from the Championship

Click here for information regarding the six local qualifying sites.

Christopher Carlin and Nicolas Cavero were tied for the lead after an impressive round one score of 62 at Orchid Island Golf & Beach Club in Vero Beach. The duo carded eight birdies during their second round to seize the victory with a final round of 64, tournament total 126 (-18).

Practice rounds are available one week prior to the championship, on a space available basis, and must be played after 12:00 PM on the weekend. The price for a practice round is $35.00 + tax. Please call (305) 591-6634 to arrange your practice round. The proper place to practice your golf swing is on the driving range, hitting multiple shots on the course is unacceptable.

Teams in the following categories will be eligible for exemption provided they meet all entry and eligibility requirements (teams must remain intact):

NOTE: Blank entries will be filed by the FSGA for players who become exempt after the close of entries

$149 per night plus tax. - Single/Double Occupancy

For reservations please call 305-592-2000, and identify yourself as an FSGA Competitor