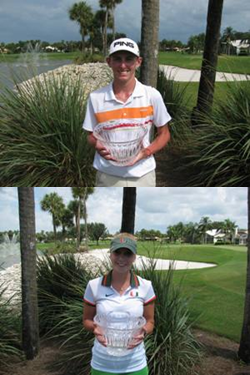 Tyler Bakich was able to outlast Cole Johnson in a back and forth match that ended in extra holes to claim the Junior Match Play Championship in the 13-15 age division.  Bakich, a Valrico native won the 17th hole to hold a 1 up lead heading to the 18th.  Johnson would not go quietly though and after a birdie on 18, the pair would go to extra holes to determine a champion.  Bakich parred the first hole which was enough to win the title after Johnson made double bogey.  Bakich's win comes on the heels of an impressive T8 finish at the Boys' Junior Championship two weeks prior.

The action came to a dramatic conclusion in final match of the Girls 13-18 division.  Lauren Riehle outlasted Valentine Herrera of Plantation in 19 holes to capture the championship.  After receiving a first round bye, Riehle made it to the final relatively easy with none of her matches reaching the 15th hole.  She found herself in trouble in the championship match however, being 1 down heading to the final hole.  Riehle was able to birdie 18 to force extra holes and and on the first extra hole she hit her approach shot to within 5 feet and made the birdie to win the title. Full Story

The Worthington Country Club 18 holes, par 72, course is meticulously and consistently well maintained and manicured. It plays like the best of the private country clubs in the area. 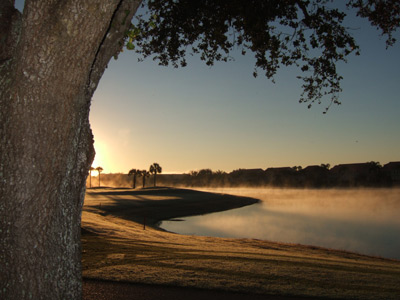 Wednesday, July 24th & Thursday July 25th
36 holes of stroke play; 18 each on Wednesday, July 24 and Thursday, July 25 to determine the low 16 boys and 8 girls.  Players will be placed in brackets and seeded based on their seeding round score.  A playoff will be held immediately to determine the last qualifier's place in either bracket if necessary.  All other seeding ties will be determined randomly.  The boys division will be cut to the low 16 players and the girls will be cut to the low 8 players.

Girls 13-18 - Championship bracket of 8.
Flight sizes may be adjusted to accommodate entries

All players must compete in the age division commensurate with their age as of the last day of the Championship. No players are allowed to play out of their age division.

Practice rounds are available one week prior to the championship.  Practice rounds may be played after 12:00 PM on Saturday and Sunday.  The price for a practice round is $25.00 + tax.  Please call (239) 495-1750 to arrange your practice round. Parents may play for $40.00 plus tax. The proper place to practice your golf swing is on the driving range, hitting multiple shots on the course is unacceptable. 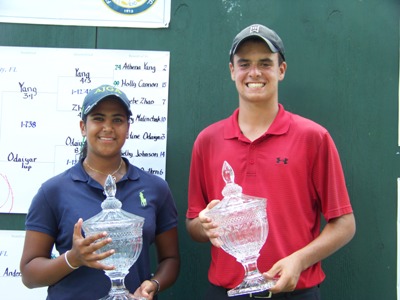 Please click on the hotel icon for hotels in the Bonita Springs area.