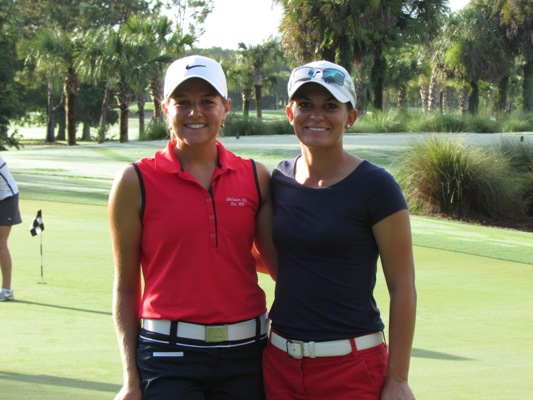 The team of Emily Rymer, of Orlando, and Ryan Ashburn, of Largo, captured the Women’s Four-Ball Championship at Bonita Bay Club, in Naples, on August 2-3.

After round one the Rymer and Ashburn duo held the lead by one stroke over Florida Junior Tour standouts Kendall Griffin, of Sebring, and Emma Bradley, of Naples. Four teams in the Championship Division each posted scores under par. Rymer and Ashburn had a bogie free round, carding three birdies on the front and four on the back while Griffin and Bradley finished strong draining four straight birdies in a row in their final five holes.

Sunday’s final round was like match play between the teams. Griffin and Bradley quickly birdied the second hole but Rymer and Ashburn answered back with a birdie on hole four. Both teams birdied the par-3 sixteenth hole that played at a short 131 yards.  Heading into the eighteenth hole Rymer and Ashburn were still up by one stroke. With both teams paring the final hole, they held onto the lead and claimed the Women’s Four-Ball Championship title.

Please join us for the Women's Four-Ball Championship to be conducted at the Bonita Bay Club in Naples, FL.  Grab a friend and plan a girl's weekend in Naples full of competitive golf, shopping, and endless dining choices.....and stay at the Ritz!  We have partnered with the Ritz-Carlton, Naples Golf Resort to provide all competitors an opportunity to relax at the gorgeous resort after a day of golf. We hope you join us at Bonita Bay!  For a look at the 2013 Championship Results click here.

*Entry fee includes all competitive rounds of golf, tee gifts, an awards luncheon after the final round on Sunday, August 3rd, and gift certificate prizes. Late entries will be accepted subject to a $10 late entry fee should the entrant gain  acceptance into the field.

The Championship Committee reserves the right to move any player out of the Forward Division if her handicap is significantly lower than the majority of the competitors in the division, and her scoring history does not reflect the need to play from the Forward Division yardage.  Players will then be placed into the Middle Division. The Championship Division may be flighted after the first round based upon scores.

The Middle and Forward Divisions will likely be pre-flighted based on combined team handicaps.

Generally, divisions of more than 10 teams will be flighted, however the Committee reserves the right to flight based on the number of teams and/or the range of combined team handicaps or scores . The valid Florida GHIN Handicap Indexes used will be from the July 15, 2014 revision.  Each player must have a valid USGA Handicap Index no higher than 34.0.  The course handicap differential between partners may be no more than eight (8) strokes.  (If the differential is more than eight (8) strokes, the higher course handicap will be reduced to allow for the difference). 100% of each player's handicap will be used.

After Saturday's first round, the duo was tied for the lead with Defending Champions, Wendi Golden and Ericka Schneider, both from Bradenton. Rodriguez and Matin were three under after four holes, leaving them two up at the turn. As they approached the 16th hole, Rodriguez and Matin found themselves tied with Golden and Schneider, but with Matin's four foot birdie putt, the duo took back the lead. The winning team had a total of seven birdies, six of which Matin made.Throughout their round, the champions did their best to play aggressive, stay positive and sink birdie putts. Matin and Rodriguez both attended Winter Park High School. Brandi currently goes to Southern Mississippi and Sarah attended University of Central Florida.