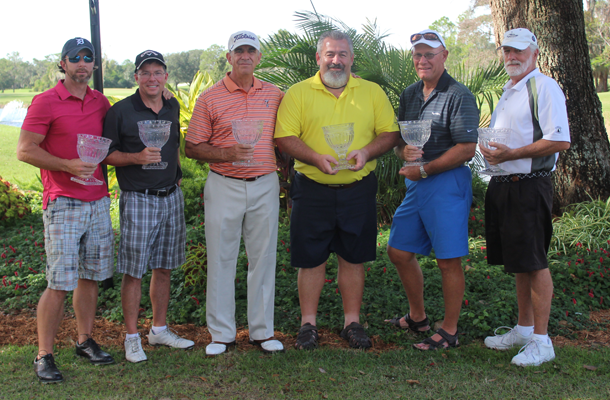 The Men’s Net Four-Ball Championship named three teams champions this weekend, December 5-6, at Walt Disney World Golf.  Play was conducted on the Palm course on Saturday and the Magnolia course on Sunday.  The teams of Mark Jerkins and Matt Ruthven, Peter Lucas and Dwaine Zitko, and Wayne Klepinger and Rick Page captured their respective divisions.

The Under 50 Age Division was earned by Mark Jerkins and Matt Ruthven.  An opening 69 placed them four shots behind the overnight leaders, Curtis Anderson and Edward Mizerany Jr.  As play moved over to the Magnolia Course, the solid play by Jerkins and Ruthven continued.  They concluded with a 66, one of four teams to do so on Sunday, finishing with a 36-hole total of 135.  Second and third place were claimed by teams which also posted a 66 on Sunday.  Tommy Briggs and Freddy Tapanes, and Daniel Riley and Jacob Foster finished second and third respectively.

The 50-64 Age Division was another hotly contested fight.  Coming out on top was the team of Peter Lucas and Dwaine Zitko.  It was a comeback similar to what we saw in the Under 50 Division.  Lucas and Zitko paced the field with a 63 on the Magnolia course.  Combining the spectacular 63 with a 67 from the Palm course resulted in a two shot victory over the teams of Steve Zonca and Greg Broxham, James Means and Tim Woodward, and Gary Morris and Michael DiFrancesco.

Finally, the 65 & Over Division saw Wayne Klepinger and Rick Page fire a tournament low-61 on Saturday.  Klepinger and Page, with a 61 and 65, had the low round in their flight both Saturday and Sunday.  Rick Tuck and Ebba Wiechowski came in just behind the victors with a 63 and 66 – both totals were second each day.  The teams of Stanley Urban and Tom Pilon, and Richard Rosmarin and Ronald Hoover rounded out the top four.

This was the second year of the Men’s Net Four-Ball Championship, and it heads back to Disney again next year.

Named for its majestic magnolia trees and host site of many PGA Tour events, the Magnolia course features elevated tees, spacious greens and challenging water hazards. Wide fairways invite you to hit the ball and hit it long, but beware—11 of the 18 holes boast water hazards and 97 bunkers dot the landscape. Sloping greens, tropical sands, and beautiful lakes characterize the challenging Palm Course. Grab a partner and compete on two fun golf courses in the 2015 Men's Net Four-Ball Championship. For a look at the 2014 Championship results click here. 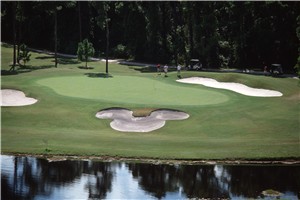 Round One & Round Two: 8:00 AM shotgun start. **No pairings request will be honored for this Championship**

Practice rounds are available one week prior to the championship on a space available basis. Practice rounds may be played after 12:00 PM Friday through Sunday. The price for a practice round is $45.00 plus tax. Please call (407) 939-4653 to arrange your practice round. The proper place to practice your golf swing is on the driving range, hitting multiple shots on the course is unacceptable. 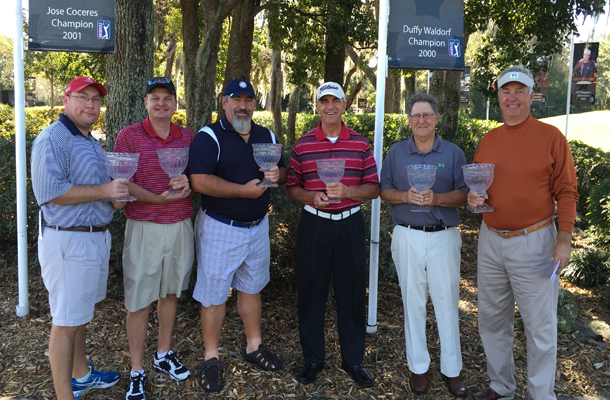 The Men’s Net Four-Ball Championship named three teams champions at Walt Disney World Golf on the Magnolia Course. The teams of Andy Weber and Patrick Brisley, Peter Lucas and Dwaine Zitko, and Keith Barber and Wayne Talmadge captured trophies in their appropriate age divisions. In the Under 50 Age Division, Patrick Brisley, of Tampa, and Andy Weber, of Lake Mary, fought through a tight leader board to be crowned victorious. Peter Lucas, of Spring Hill, and Dwaine Zitko, of Tampa, captured the 50-64 Age Division with a 14 under-par, 130, tournament total. Keith Barber and Wayne Talmadge, of The Villages, posted two bookend rounds of 63 to capture the 65 and Over Age Division.