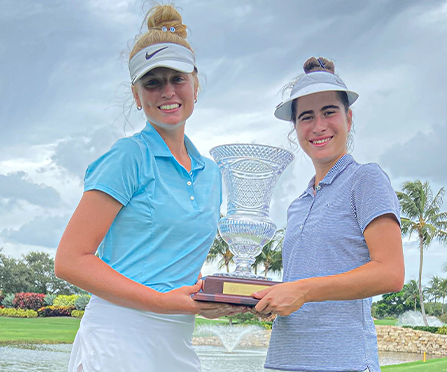 Williams and Nachmann began the championship with a 7-under 65 in Saturday’s first round. The pair had seven birdies to finish the day tied with Karoline Tuttle and Xinyi (Iris) Wang.

The duo began the final round with a 1-under front nine, with a birdie from Nachmann on the fourth hole. Nachmann and Williams started the back nine with their only par on the back side on the 10th hole, and finished the championship with eight birdies on the last eight holes to card a final-round 63.

Patsy Ehret and Rebecca Rotter took home the win in the Middle Division after rounds of 70-71 to finish at 3-under 141. While Joy Passalacqua and Patricia Hughes-Gelardi used rounds of 67-65 to capture the net victory at 12-under 132.

Jodi Vanhove and Patti Hutcheson clenched the victory in the Middle First Division with rounds of 77-71 finishing at 4-over 148. Lynda Dao-Vo and Patty Dailey took home the net win after firing rounds of 62-67 to finish at 15-under 129.

Entry fee includes all competitive rounds of golf, tee gift, awards luncheon and gift certificate prizes. Late entries will be accepted subject to a $10 late fee should the team gain acceptance into the field.

Entries will be accepted based upon the order of receipt. Half of the number of teams for the entire field will be held for the Championship and Mid-Amateur Divisions. Entries received after the competitive field is full, or after the close of entries, will be placed on an alternates list. Alternates will be contacted in order of receipt of entry, if and when, a spot becomes available. 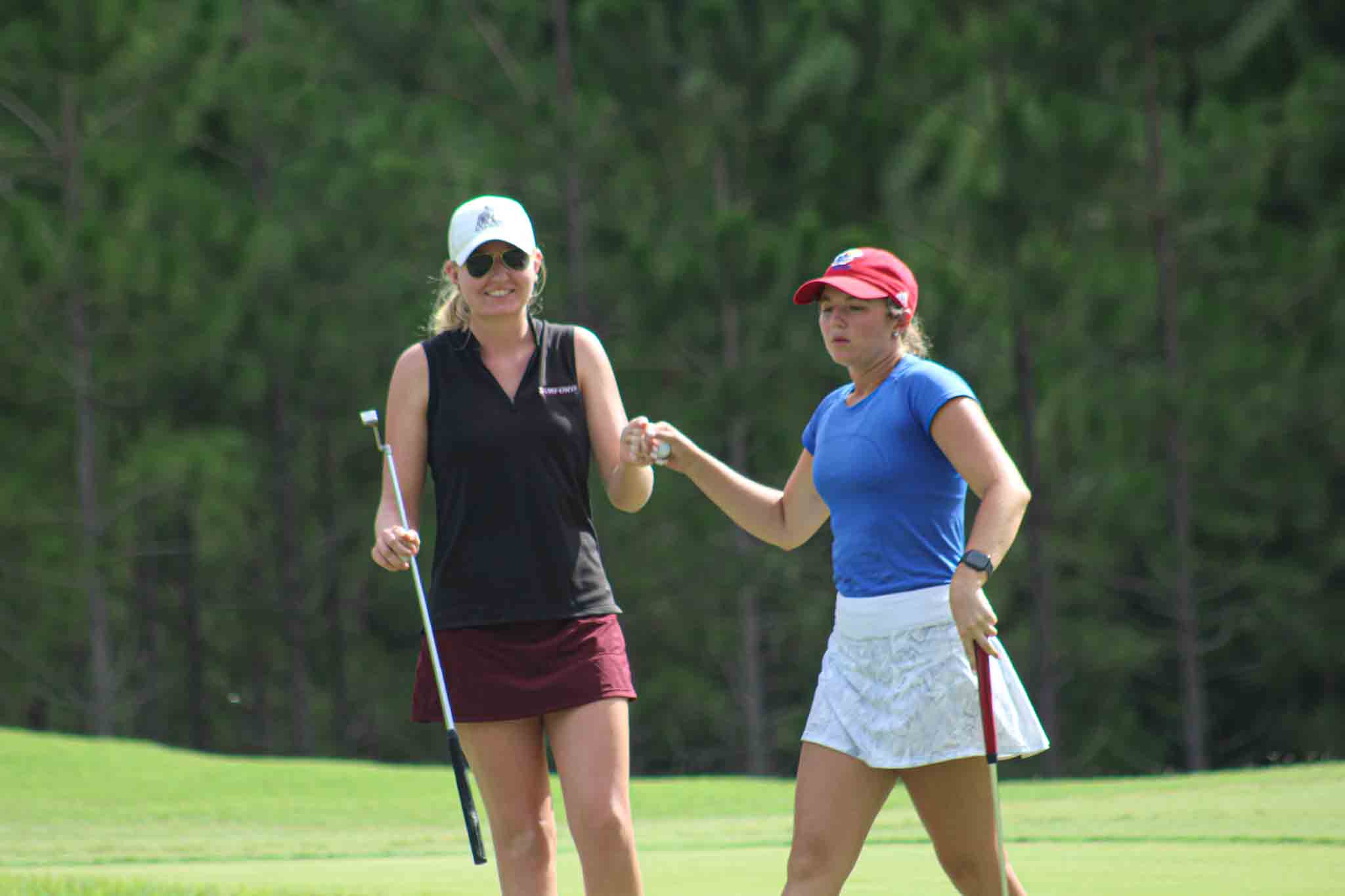 The Championship and Mid-Amateur Division are gross only and will not be flighted.

Championship Division – The overall Champion will be the team with the lowest total score.  A team competing in the Mid-Amateur Division is eligible to win the overall Championship. In the event of a tie for first place, there will be a hole-by-hole sudden death playoff on a hole designated by the Committee to determine the Champions.

Practice rounds are available one week prior to the Championship on a space available basis and after 12:00 PM the weekend before. The price for a practice round is $35.00 + tax and includes cart and range balls prior to the round. Please call 561-622-6501 to arrange your practice round. The proper place to practice your golf swing is on the driving range, hitting multiple shots on the course is unacceptable. 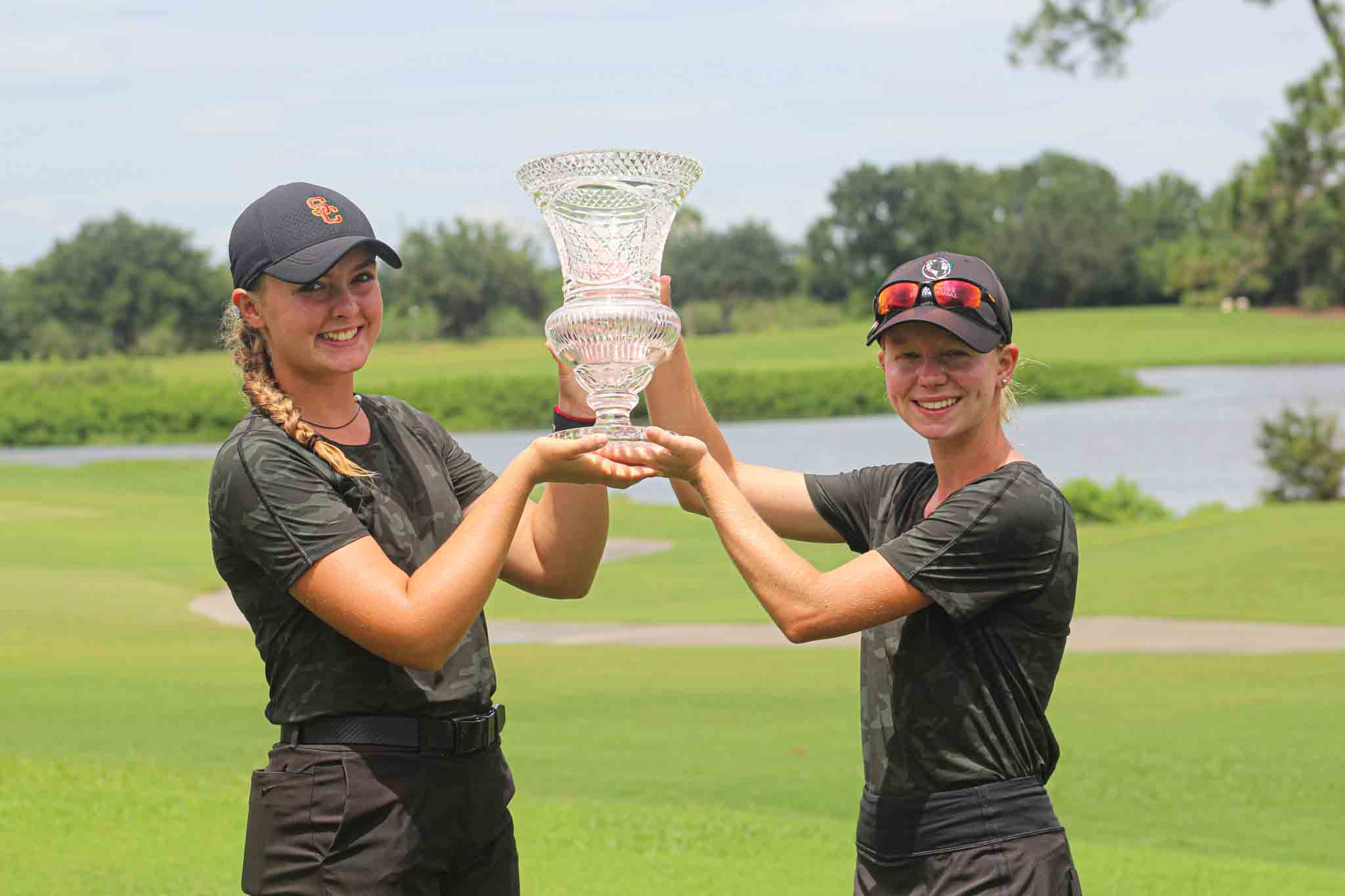 The pair got off to a strong start in Sunday’s final round, birding two of their first three holes. Hewlett added a birdie on the ninth to make the turn at 3-under. Their only hiccup of the day came with a bogey on the 10th, but the two quickly rebounded with two birdies over the next three holes. With back-to-back birdies, Hewlett brought the team to 14-under for the championship and into a tie for first place. Shoemaker and Hewlett fired a final-round 66 to finish the day at 14-under 130 and in a tie for first with Kaitlyn Schroeder and Lauren Clark. Shoemaker birdied the first playoff hole to give her and Hewlett the victory. Click here for the previous year's results.