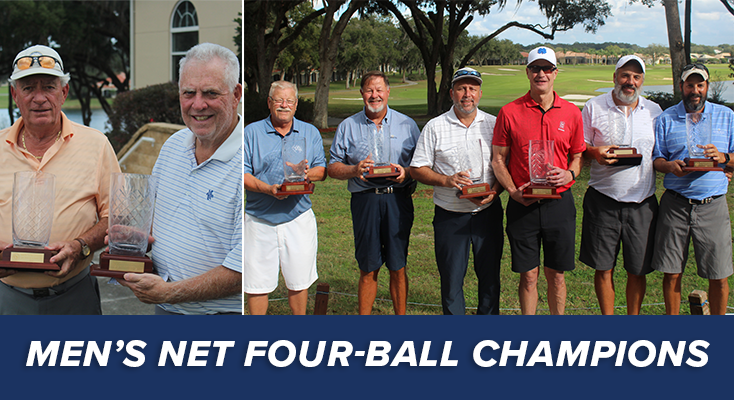 DADE CITY, Fla. – Four teams raised trophies at the Men’s Net Four-Ball Championship on Sunday at Lake Jovita G&CC. Kris & Paul Vassallo were victorious in the Under 50 Division, while Michael Mursten & Glenn Grossenbacher took home the win in the 50-59 Division. Robert Rosenberger & Rodger Daugherty earned the win in the 60-69 Division, while James Quick & Marson Germanetti picked up the win in the 70 & Over Division.

The Vassallo brothers saw themselves staring up at the leaderboard entering Round 2 after firing a 71 (-1) on Saturday. Their impressive 62 (-10) on Sunday was more than enough to erase the three shot deficit and squeak out a win over a jam packed leaderboard. Paul Vassallo came in with a clutch birdie on their final hole to defeat the team of David Mealey and Brian Soldano by one shot. Mealey & Soldano also came in with a fantastic Round 2 score of 62 (-10) to capture solo second place, while the team of Dylan Hissam & Blake Bartholomew rounded out the top three.

Coming from behind was a common trend on Sunday, as Mursten & Grossenbacher clawed back to overcome a four shot deficit in Round 2. After shooting 73 (+1) on Saturday, they bounced back with a stellar round of 66 (-6). Mursten & Grossenbacher's Round 2 score was the low of the tournament within their division, and was enough to give them a two shot victory over the team of Brian King & Ken Wilson. Wilson & King finished solo second for the event, while Michael Mendoza & T Nowzamani came in third place.

Rosenberger & Daugherty battled to the end in order to come out on top in the 60-69 Division. The duo fired a 67 (-5) in Round 1 and found themselves one shot back of Kevin Hewlett & Arne Victorine. In Round 2, Rosenberger & Daugherty followed up their great Round 1 score with an even better score of 66 (-6) on Sunday to capture a one shot lead. The team of Bruce Moskovciak & John Thompson put a great fight and nearly overcame a six shot deficit by shooting 64 (-8) in Round 2, but just came up short in the end to capture second place.

Germanetti & Quick successfully defended their title as they have now won back to back years in this Championship. After sitting three shots back at the completion of Round 1, they came back and shot an impressive Round 2 score of 68 (-4) in order to win by two shots over the team of Bobby Kilgore & David Norka. After holding the 18 hole lead, the team of Jack Christensen & Dennis Natale finished in third place.

Entries will be processed if players have completed 2 One-Day events (don't need to be Four-Balls) in the 2021 season, and will be first come first serve.

$280 *Price per team* ($140 per player) - Entry fee includes both competitive rounds, cart fees, tee gift, and gift certificate prizes. Late entries will be accepted subject to a $10 late entry fee should the entrant gain acceptance into the field.

Practice rounds are available one week prior to the Championship on space available basis and after 12:00 PM the weekend before. The price for a practice round is $45.00 + tax and includes cart and range balls prior to the round. Please call (352)-588-9200 to arrange your practice round. The proper place to practice your golf swing is on the driving range, hitting multiple shots on the course is unacceptable.

Lake Jovita accepts both cash and all forms of credit cards.