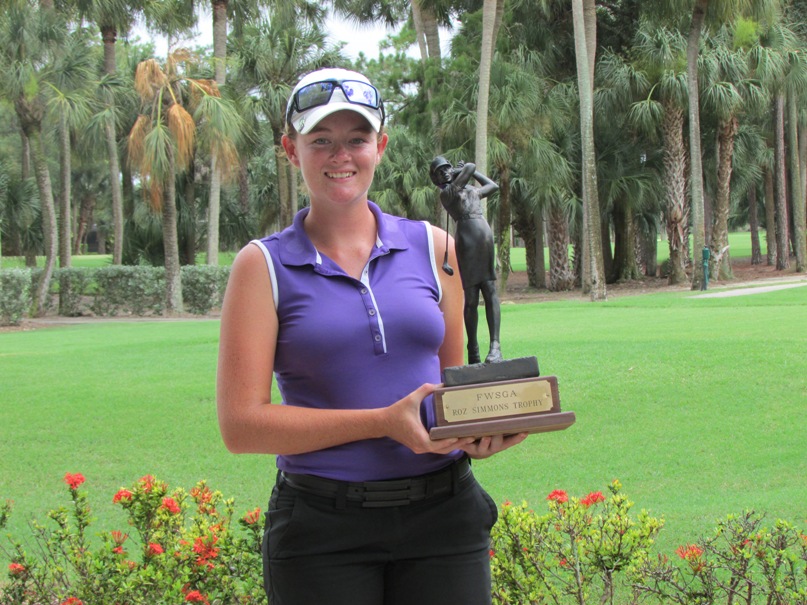 Lauren Lamm, of Lakewood Ranch, posts a tournament total of two-over par 218 to win the Championship by one shot. Lamm opened up the Championship with a three-over par round of 75 to trail the first round leaders by three strokes. The second round was delayed over 5 hours due to in-climate weather, but when the skies cleared Lamm carded an impressive round of one-under par 71, to grab a share of the lead after 36-holes.  After a 4 1/2 hour delay on Sunday, Lamm came out firing with birdies on 2 and 4 to go along with only one bogey to turn at one-under par 35. After playing holes 10-17 in only one-over par, Lamm would head to the 18th tee with a one stroke lead. Lamm hit two great shots to set up a routine par on the last hole to post a final round of even par and win the title.

Tara Connelly, of Palm Beach, took home second place honors after rounds of 74-73-72. Connelly narrowly missed out on a playoff after her birdie putt on the 54th hole just grazed the hole to fall just one shot short. Kimberly Benedict, of Bonita Springs, Megan Kiley, of Lakeland, and the 2012 FSGA Women's Player of the Year, Meghan Stasi, of Oakland Park, all finished tied for third place with a tournament total of four-over par 220.

Gross Only - No Handicaps

Natural beauty and quality golf combine in this convenient south Fort Myers location at one of the leading traditional, private clubs in the area, The Forest Country Club.  The famed Bear Course exceeds the expectations of all who experience it, including participants in the U.S. Open Qualifier and Florida Match Play Championship, both hosted by the course.  Ranked by GOLFWEEK Magazine as one of Florida’s Top 25 Most Distinctive Courses, The Bear provides the ultimate golfing challenge.  Click here to learn more about the Forest Country Club. Must be a female amateur member of the FSGA with a valid Florida GHIN handicap.

$195    Late entries will be accepted subject to a $10 late entry fee, should the entrant gain acceptance into the field.

There will be an awards luncheon following play on Sunday, July 14th.  The lunch is included.

Must have a Florida USGA GHIN Handicap no higher than 18.4.  Gross ONLY - No Handicaps.  Click here to enter to Women's Field Championship!

54 Holes of individual Stroke Play - Scored at Gross Only - No Handicaps are used.

Flights will be establish after 36 holes of stroke play.

There will be only one division, competing for the Championship on a gross basis.  The Champion will be the individual with the lowest 54 hole total score.  In the event of a tie for first place, there will be a hole-by-hole sudden death playoff.

Practice rounds are available one week prior to the championship for $35.  Weekend practice rounds may be played after 12:00 PM.  Please call (239) 481-5700 to arrange your practice round. The proper place to practice your golf swing is on the driving range, hitting multiple shots on the course is unacceptable. 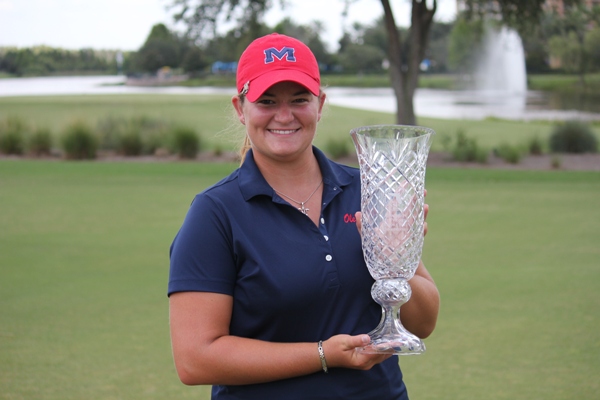 Ericka Schneider, of Bradenton, won the 2012 Women’s Stroke Play Championship firing a tournament total of 4-under par, 212 at the Ritz Carlton in Orlando.

In the first round, Schneider grabbed the lead with an impressive four-under par 68, and followed up with a second round two-under par 70, extending her lead by three heading into the final round.  In the final round, Ericka's lead narrowed after two bogeys placed her only one-stroke ahead of Kristine Odaiyar, of Ocala.  Ericka quickly recovered and regained her two-stroke lead by birding thirteen and finishing at two-over par for the day.

Please click here to read the spectator policies.  Spectators and caddies are always welcome at FSGA Championships. Only players are allowed to ride in carts. If a player employs a caddie, the caddie MUST walk and the player's clubs must remain on the golf cart. Please click the View Hotels tab in the Tournament Links section for hotels in the Fort Myers area.