Buege and Sealy were one-shot back heading into Sunday’s final round.  The father-daughter duo and 2012 Fall Mixed Team champions, Kevin and Alexa Hammer, and the team of Robby and Lauren Riehle came out of the gate strong, both with rounds of 66 on Oak Marsh course to have the lead by one going into Sunday. One shot back after the first round, nothing stopped Buege and Sealy during Sunday’s round on the Ocean Links course, posting scores of 67-63-130 to win the Championship Division.  They shot a seven-under par final round to take home the title by four shots.  Kevin and Alexa came in second with rounds of 66-68-134.

In Championship Division, Richard and Megan Pollenz took home the first place net with a two day total of 131.

$300 (per team)
Entry fee includes awards luncheon after play on Sunday. Late entries will be accepted subject to a $10 late entry fee should the entrant gain acceptance into the field.

36 holes of four-ball stroke play. Both gross and net competitions are played concurrently. Awards and gift certificates are awarded in both divisions with gross scores receiving priority.

Teams may select to play in either the Silver Division or the Bronze Division.  There is NO yardage mix allowed between divisions.

The tournament will use the USGA's recommendation of:

Practice rounds are available one week prior to the championship.  Practice rounds may be played after 12:00 PM on the weekends. The price for a practice round is $35.00 + tax. Please call (904) 277-5907 to arrange your practice round. The proper place to practice your golf swing is on the driving range, hitting multiple shots on the course is unacceptable. 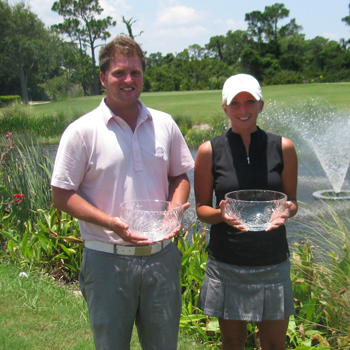 Please click the View Hotels tab in the Tournament Links section for hotels in the Amelia Island area.